Ya really got to feel sorry for libtards, don’t ya? Ok ok. No, ya don’t.

But there is no doubt that the idiotic left is good for some chuckles and more than a few belly laughs. For example, in the wake of President Trump’s epic, historic, terrifically successful 4th of July spectacular on the Washington DC Mall, the left is so desperate, so pathetic, so forlorn that they actually attempted to lie about the size of the crowd that showed up for POTUS’ 4th of July celebration.

Here, listen to the new darling of the ridiculous left…

Did you know? This little girl is so stupid she got fired from her bartending gig because she forgot the ingredients to make ice cubes. Seriously, she needs a sit down with the Bobs…

Chairman of the Democratic Coalition Jon Cooper did the same, saying, “Trump’s event in DC today has drawn an embarrassingly small crowd — despite his desperate attempts to boost attendance by adding flyovers and a display of tanks.” And the Huffington Post’s lead article Friday morning was entitled “Tepid Turnout,” and said the event “numbered possibly as little as the high tens of thousands.”

Well, let’s take a look at that “embarrassingly small crowd” in what idiot-girl says was a “poorly attended” event. They say a picture is worth a thousand words. Ok. Here ya go…

…this is how poorly attended POTUS’ 4th of July speech was….

Oh, yeah. One thing. As you look at the images, keep in mind these were taken during a steady rain!

See all those people on either side of the reflecting pool? The pic above doesn’t really capture the SIZE of the crowd. Here it is much more clear…and this is just ONE section of ONE side of the pool….

As POTUS said, the crowd stretched ALL the way back to the Washington Monument….

In fact, POTUS was understating it. The crowd stretched well PAST the Washington Monument…

Folks, this was the first time a President gave a speech on Independence Day in nearly seven decades. And POTUS spoke for nearly an hour to an VERY enthusiastic crowd (who ignored the weather to be there!).

Our MAGA movement, led by a man who…in just 30 months…has proven himself to be the greatest living President and one of the greatest of all time, is growing exponentially. By leaps and bounds, tens of MILLIONS of people in America…and all over the world….are flocking to the political right. (See recent elections all over the world, as documented here in the Wolf Den.)

This kind of enthusiasm cannot be bought. It cannot be faked. It is genuine, it is organic, and it is authentic.

And led by Donald J. Trump, it is now GLOBAL.

My very dear friends and fellow patriots, not only are WE the news now, we…like our forefathers…truly ARE on the right side of history.

We are witnessing one of the most historic presidencies in our Republic’s history. If any here ever doubted this, then doubt no longer.

With doubt removed, let us be fearless in our support for President Trump. Let us be as proud and brave as the great Scott Presler…

Let us be vocal, unwavering, strident, and unapologetic.

It is the left that is afraid. Their anger is the manifestation of their fear. They ARE afraid. They are taken aback. They are unsure. And they have good reason to be, because they are NOT on the right side of history. They are the loons, the minority, the fringe, and they are losing BADLY.

THIS is the significance of the size of this crowd. And it is precisely WHY the President called it together, so we could SEE it.

View all posts by ForGodandCountry

Is there an estimate on numbers yet? And, compared with inauguration? This was a tightly packed in crowd too. I had no idea it was the 1st speech on the 4th for that long. Utterly shameful. A POTUS should do one speech on a 4th each term at least. Well…it took a man with cajones and skillz to do it..and do it right!

I can tell you this much – that crowd is MONSTROUS.
Look at this picture for perspective. I think it’s definitely bigger than the inauguration, and remember all the tricks used by Obama and the Fake News to control perceptions of the inauguration. 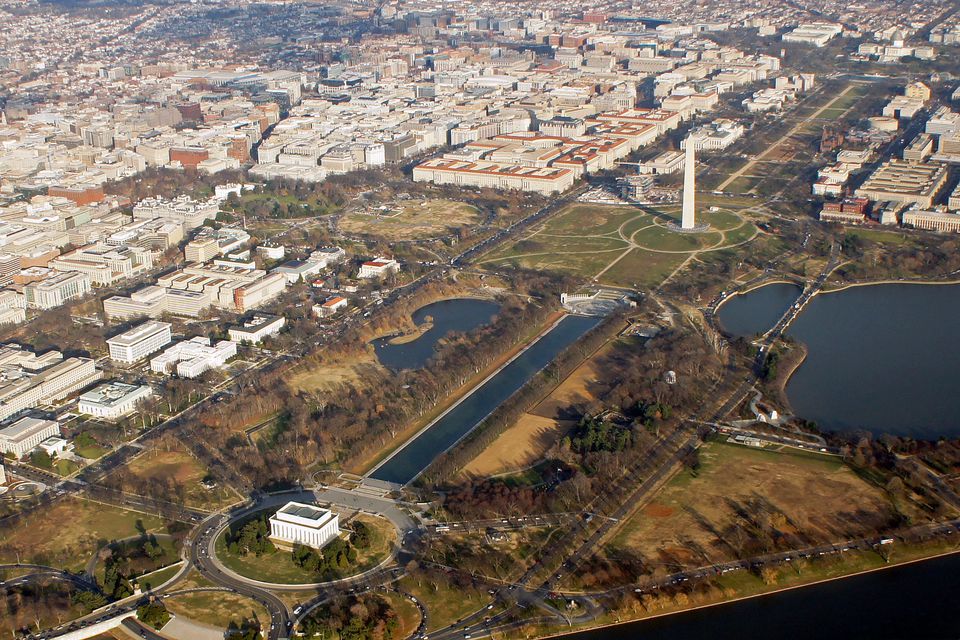 wow! thanks Wolf for this picture–I didn’t appreciate the size of the crowd till I saw the venue empty!!!

Wasn’t Obama at his rented estate on the Vineyard by that time for his second 17 day vacation of the year?
I read a tweet yesterday from another loving soul who felt compelled to snark about POTUS going to his place in NJ for the remainder of the holiday weekend…”what, taking another vacation?”
bTW, have the Obamas ever gone back to Hawaii (you know…his childhood home and therefore completely reasonable to spend the money and take support staff away from families) once we tax payers weren’t footing the bill?

The obamas are done with hawaii. He went to grandmas to clear out all the evidence of his family. Notice we NEVER EVER hear about his sister or her brother? I also remember her mither being brought in as the nanny, theregore living in the WH and getting paid. I also bet they got rid of the dog they got as a photo op.

Poor little pet might’ve had a name change from Bo to BBQ.

THANK YOU for this FG&C. Excellent documentation for all the #FAKEFAKEY #FAKENEWS

Totally agree, FG&C! We are winning big time and the left have become the whiney, unhinged fringe. By the end of our POTUS’ 2nd term, there shouldn’t be much left of them.

Is that Barron to our right (Trump’s left) in the “complicated business” GIF? If not, who is it?

Yes, that’s Barron! Absolutely amazing how very much he has changed in the last 2+ years!

Yes. It’s the invisible kid. They have got him locked down tight. Probably Melanias big condition. After all Potus is taking on a swamp that’s deep and wide. It wouldn’t do for them to have a hostage or score

And I’ve gotta say, that’s a helluva turnout in rain. I’ve been a Candyass Californian since the day I was born, and The Wizard of Oz convinced me that rain would melt me into the ground.

So you weren’t there. 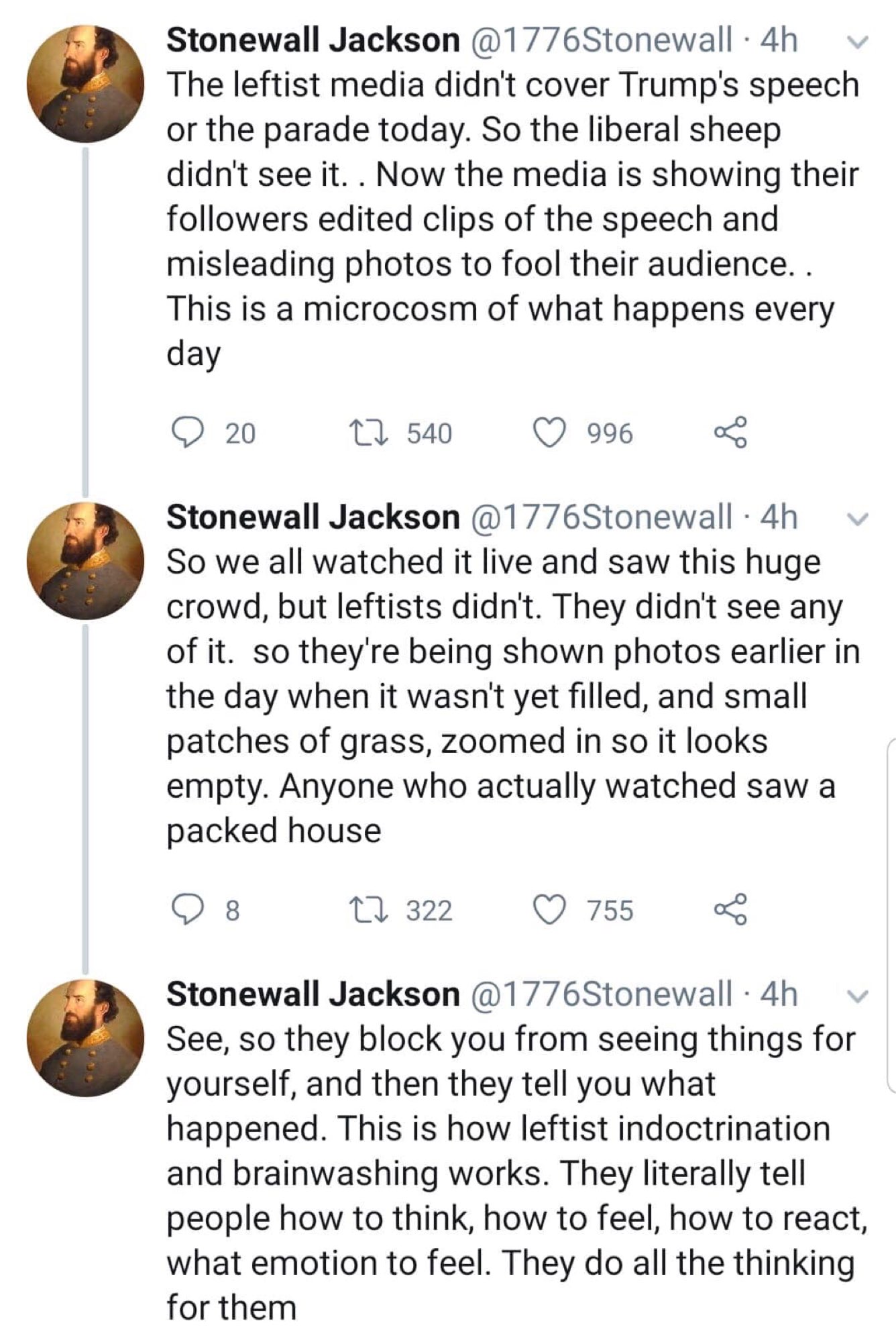 thanks for all the pix FG&C!
and I love the meme of POTUS with the gun!

Disappointing that the MSM can so blatantly lie to the people. Unfortunately, there are many who won’t ever know the truth because of the news’ feeds they have on their smart phones.
OTOH, I would think that there were people who might have surfed around just to see what was happening in DC, knowing POTUS was going to speak. After all, the MSM spent several days badmouthing the event – which got the word out to the people. 🙂
The other point, for all the #MAGA and GOP in that crowd, quite a few had to have been Democrats – regular folks who care about the country and like the 4th – which means they got exposed to President DJT, and maybe they’ll do some thinking…

This patriot was in attendance at President Trump’s Salute to America. My husband and I traveled to DC for the occasion. It was our first vacation since the Inauguration.
I want to note one important observation. In my opinion, it is THE most important part of this wonderful celebration, and that is – a significant percentage of attendees were YOUTH! Twenty and thirty-somethings. Hell, teen somethings. Young families. It was a gathering of Americans, by Americans and for Americans.
I saw signs of people who had jumped into their cars and driven, maybe all night, to witness the event. Crashed on the lawn, on blankets, mats, their backpacks, whatever. Remember the days when you could barely afford a meal, let alone a place to stay overnight; yet you managed to scrounge up the gas money to take the trip? Like that.
Afterward, I kept hearing snippets of conversation from our young people. They were truly inspired by the president’s speech, coupled with the flyovers. Talking to each other, talking on cell phones, speaking in superlatives – ‘the most fun I’ve ever had;’ ‘never been hit with feelings like this;’ ‘the best thing I’ve ever done in my life;’
I kept hearing comments like that, over and over, as we made our way through the packed crowd exiting the venue.
People, something truly remarkable happened at our Salute to America. It was confirmed by President Trump during his press gaggle the next day before taking off for his well-deserved weekend at his Bedminster property.
The president mentioned he’d already been told about a spike in calls to recruiters. He said that with the jobs numbers so good, recruitment had been lagging but that this Salute to America had generated great interest.
Heroes and their stories never go out of style. And neither does WINNING!!!!
God bless all on this board.

I am glad you put up this post, ForGodandCountry.

Yes…we did notice the young crowd (of course, only the young would endure a lot of the conditions! LOL).
However, it was very uplifting to see and gives me hope.

22
0
Would love your thoughts, please comment.x