At Church on Monday, I found out one of the maintenance guys is a conspiracy follower. He showed this to me and a friend who also is.

With that in mind:

It’s a regular convention in Ukraine. So, what exactly is going on?

We’re not seeing it, whatever it is.

As for 2,000 Mules, it comes highly recommended from all quarters. Those who have not followed all of the fraud at the granular level are now waking up to just how bad it really is. It’s important to stress that the mule effort was part of a larger whole when talking about the 2020 election being stolen with people whose eyes are newly opened.

On May 5th, Fox News host Tucker Carlson interviewed Catherine Englebrecht from True the Vote (TTV) and discussed a massive ballot harvesting scheme in the 2020 election.  The work done by Englebrecht formed the basis for a documentary by Dinesh D’Souza that outlines the 2020 election fraud and how it was done using ballot mules.

We noted at the time of the interview, it seemed odd that neither Tucker Carlson nor Catherine Englebrecht would mention the documentary movie “2000 Mules” that was premiering during the week of the interview.  It all seemed rather curious. Well, now Dinesh D’Souza is stating that Tucker Carlson and his team specifically instructed Catherine Englebrecht not to mention the movie.

And for some reason, the Handmaid’s Tail dress-up drill team decided to storm churches over the weekend to protest the possibility that Roe vs. Wade may well be overturned this year. Didn’t work. Men actually stood up and either blocked entrances or broke up the protests.

In the larger scheme of things, though, the dump of information regarding all the corruption in our political system is picking up steam, although not at the pace most would like. The main thing is that the people who need to absorb this information need to pay attention when most of them drive the wrong way down grocery store parking lot lanes. The spell is going to be difficult to break.

There was discussion regarding this man on this forum over the weekend.

Great sermon about this.

Your weekly reminder to take the pledge:

The discourse on this site is to be CIVIL – no name calling, baiting, or threatening others here is allowed. Those who are so inclined may visit Wolf’s other sanctuary, the U-Tree, to slog it out. There is also a “rescue” thread there for members of the Tree to rendezvous if the main site goes kablooey. A third site has been added for site outages of longer duration.

22It was the feast of the Dedication at Jerusalem; 23it was winter, and Jesus was walking in the temple, in the portico of Solomon. 24So the Jews gathered round him and said to him, “How long will you keep us in suspense? If you are the Christ, tell us plainly.” 25Jesus answered them, “I told you, and you do not believe. The works that I do in my Father’s name, they bear witness to me; 26but you do not believe, because you do not belong to my sheep. 27My sheep hear my voice, and I know them, and they follow me; 28and I give them eternal life, and they shall never perish, and no one shall snatch them out of my hand. 29My Father, who has given them to me, is greater than all, and no one is able to snatch them out of the Father’s hand. 30I and the Father are one.”

PURE EVIL: Biden DOJ Is Threatening Jan. 6 Defendants With Life in Prison after Walking Inside US Capitol and Taking Pictures https://www.thegatewaypundit.com/2022/05/pure-evil-biden-doj-threatening-jan-6-defendants-life-prison-walking-inside-us-capitol-taking-pictures/

Torturing hostages is so KAPO.

Trump Announces First Move After 2024 Victory Will Be Appointing Himself Head Of Disinformation Board
Politics
May 10th, 2022 – BabylonBee.com

LOVE it! 😂 He already points out fake news all the time. 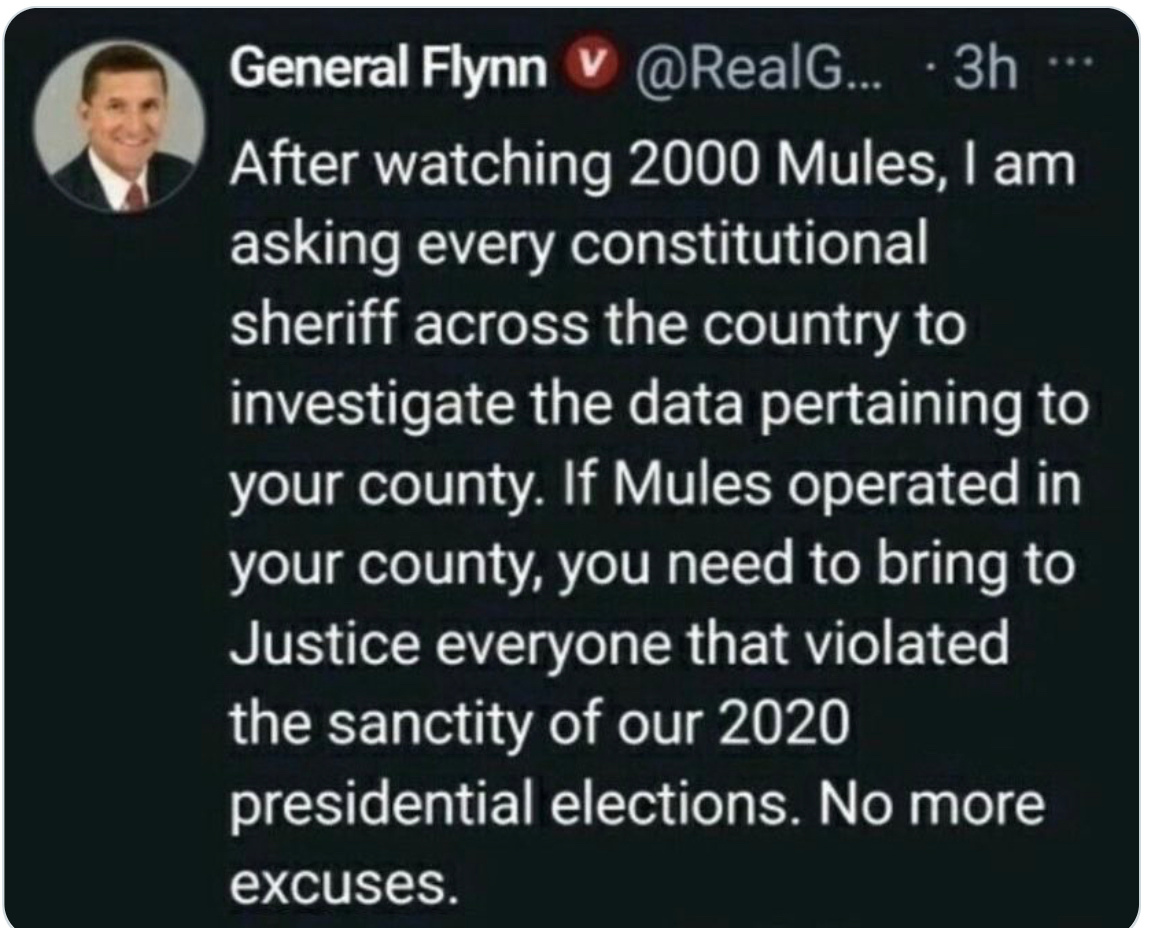 Hopefully they take him up on this Sheriff Joe Arpiao style with Citizen Grand Juries called. Let them investigate far and wide and force all these billionaires and their minions that bank rolled this to lawyer up and where it leads to crimes else where let them go there as well.

Two weeks from now in Switzerland, the US will offer amendments to provide WHO with authority over 193 nations to issue proclamations for lockdowns, no export, travel bans, etc., in the name of HEALTH.
Of course, this is the WHO which is controlled by China and got almost everything wrong during the pandemic.
It also gives up US sovereign authority.
AND it’s the major first step in a platform for world government.
Kere’s the kicker.
If it passes, and it looks like they have the votes, the new “authority” will take control in November – no matter which party wins in America.
It must be defeated, and the GOP is clueless about these amendments. They have no idea what is going on.

“…the GOP is clueless about these amendments. They have no idea what is going on.”

The GOP – UNIPARTY KNOWS EXACTLY WHAT IS GOING ON.

IF we KNOW, the GOP – UNIPARTY bastards in DC KNOW.

R-Con Bastards ARE selling us out.

Bannon only found out yesterday. I believe they did not know. Dems are diverting with abortion and riots and Ukraine while secretly seling us out. What we are seeing is kabuki and the real damage is done what we do not see.

Well, OK, but not buying it.

I heard of it a week or two ago. On a couple occasions. Shared here once a few days back. Yesterday after listening in on Bannon.

IF WE know, R-Cons KNOW.

IF ONE R-Con KNOWS, he should be SOUNDING THE CLARION ALARM.

EVERY Conservative should be screaming the news.

But, mostly crickets. Something is way, way off.

Bannon had it yesterday. Today? I couldn’t listen in much today.

Banno certainly has a line to Trump. Nothing from Trump.

Understand BiteMe and his goons tried to hide it all. But the information IS out there, sort of.

IF this SHIT goes down as advertised, outside of Blue cities, Americans WILL FLIP OFF any asshole enforcing WHO BULLSHIT.

I can see you are ticked off so am I. This came out of the blue. Maybe I heard it did not understand it who knows. Now I know we know and some of the rep. know because Bannon told them. It keeps just coming they want to wear us down. I am not complying 🙂

It’s a shiny squirrel. The enemy wants us focused on this non-issue.

That is where I am.

But, it would be nice to hear a conservative call it BS, Loud and Clear.

I like that sentiment but on Bannon tonight it was said that they will also have a enforcement faction drawn from all member countries. What we saw happening in Australia didn’t look like resistance was tolerated.

Individuals, even with a weapon, won’t be able to win.

IF that IS the case, things WILL get ugly, fast.

This will have no effect on US sovereignty but the thugs want you to believe that it does.

Bannon said it does and the left is pumping propaganda saying it does not. I rather err and the wrong side then find out we lost.

Do we KNOW IF Bannon discussed this today? IF not, more evidence it is a nothing burger.

IF Bannon was buying into it, I am sure, he has a line directly to Trump or his Chief of Staff. Trump would NEVER sit on this. He’d have EVERY MAGA type raising hell via phone, text, email…

But we hear mostly crickets.

Something IS OFF with the narrative we are being fed.

Yes he did discuss it today and had the guy on who rang the alarm. He will have him on again tomorrow.

Looking forward to it. Hopefully I’ll be able to listen in.

I don’t know if something is off but when they tell us they want NWO, Great reset, fundamental change, etc AND they begin the process…we have to believe them. In the last months they’ve stepped up the program so this seems totally plausible….AND having us not think it’s serious..nah it can’t happen is right up their psy op alley.

I really hope that you are right!

Just thoughts here, but might work like dragon’s teeth sewed into the ground. We hear nothing much more until a new crop of dictates and regulations begin to spring up. At first we chop them off at the head and try to drag them to court. Eventually the courts tell us “nope you have to abide by this and this and this because that’s the way the treaty has been modified”. At which time we’ll have to come up with new ways of non compliance and circumvention of the new rules which will in themselves be new fuel for the fire until we can get someone to break the treaty.

We are basically in permanent battle & resist mode–God help us, literally! Good thoughts–thanks for sharing 🙂

That’s if the dissention can skate by the new ministry of truth. Merely voicing that this new treaty sucks will be ‘ disinformation’, unsafe for others to read or hear.

255
0
Would love your thoughts, please comment.x