(1970s) Ellison began working for Ampex Corporation. His projects included a database for the CIA, which he named “Oracle”.….

President Trump left the WH today for a fundraiser at Larry Ellison’s (founder of Oracle and devotee of America’s Cup Racing) home in Rancho Mirage, California. The home is called Porcupine Creek.

Here is the schedule for the next week. Buckle up, it’s busy.

President Trump will dominate the headlines

A little bit more about Porcupine Creek. I saw this house when it was on the market. The swimming pool holds 675K gallons. Compared to our lovely swimming pool which holds 38,000 gallons….. it’s practically 20Xs the size of my “estate-size” swimming pool.

The home WAS owned by Tim and Edra Blixseth who were the founders of Yellowstone Club, exclusive Golf Resort where Obama showed up to golf the day after Trump’s inauguration. Hehe…

Playing off the profit of developing Yellowstone Club, Tim and Edra Blexsith built their own trophy home on a prime select 249 acres, with the 11th best golf course in California. The estate has an 18,430-square-foot Mediterranean-style main home, 16 bedrooms, located in the heart of the sun-drenched city of Rancho Mirage at the base of the Santa Rosa Mountains. The home has hand-painted ceiling murals, an amphitheater and a resort-style pool. With eight two-bedroom guest houses, a gym, spa, an outdoor party grotto with a full-size stage, and commercial kitchens, the private home has been the scene for numerous charity events that often drew 500 or more guests.

Here’s the link for oodles of pics of the interiors: https://www.businessinsider.com/larry-ellison-porcupine-creek-2011-2#what-a-view-for-a-round-of-golf-14

But Tim and Edra had a bloody divorce and listed the property for sale at 75 million dollars.

The property didn’t sell….. lingered…… you know, that Obama economy was tough on Cali real estate. The Blexsith’s dropped the price to 55 million dollars to settle the divorce. Enter Larry Ellison…. the world’s 6th richest man at the time. Ellison snapped up the property for 42.9 million, cuz not even billionaires pay retail.

Lawrence Joseph Ellison (Larry)…….. we could write a dozen books on him…… is an American businessman, entrepreneur, and philanthropist who is a co-founder and the executive chairman and chief technology officer of Oracle Corporation.

As of October 2019, he was listed by Forbes magazine as the fourth-wealthiest person in the United States and as the sixth-wealthiest in the world, with a fortune of $69.1 billion, increased from $54.5 billion in 2018. How/why do you suppose Ellison increased his holdings by 15 billion dollars in one year? Could it be because of this man?

From WIKI: Ellison is 75 years old, been married and divorced 4 times, 6’3″ tall, and was born in the Bronx to an unwed Jewish mother.[5][6][7][8] His biological father was an Italian American United States Army Air Corps pilot. After Ellison contracted pneumonia at the age of nine months, his mother gave him to her aunt and uncle for adoption.[8] He did not meet his biological mother again until he was 48.[9] Raised Jewish but refused Bar-Mitzvah.

His adoptive parents moved to the burbs of Chicago. He was a member of the “fighting Illini at Champaign-Urbana for two years when his mother died. He spent the summer in California, and went back to the Univ of Chicago for one semester where he was “introduced to computer design”. He checked out in 1966, at age 22, and moved to Berkeley.

In the 1970s, Ellison began working for AMPEX. His life is a fascinating read of the wild west in Silicon Valley. Ellison was ruthless, put competitors in jail, jostled for control, accused of insider trading, paid off charities, and rode the wave. He’s an American success story. Larry Ellison collects homes, cars, yachts, tennis tournaments, planes, and people. Politically, he has endorsed Rand Paul and Marco Rubio in the past, and contributed to both Dems and Repubs.

While 2200 Oracle employees have signed a petition “demanding” Larry Ellison rescind the invitation to President Trump, ALL OF SILICON VALLEY KNOWS, they are under pressure for regulation and taxation from foreign governments. America’s tech titans have created vast wealth and mean to protect it. Nothing motivates like love of money. Greed makes strange bedfellows and the founders of Silicon Valley know that Bernie/Liz Warren/even Bloomberg will not defend them internationally, like President Trump has and will, and a socialist would never keep the economy roaring like President Trump, while they all know Bloomberg is a sell-out to China. Odd, eh?

Nonetheless, for Larry Ellison to step out and endorse Trump is a big deal.

Remember the 1970s = Ellison began working for Ampex Corporation. His projects included a database for the CIA, which he named “Oracle”.

Would be very interesting to see the guest list. :8-}

Great info Daughn. It begs the Question is PDJT going for the endorsement or information?

Well , there is a good question, Brave and Free!
I don’t know.
There are so many coincidences in this fundraiser. The exact spot Obama went to the day after Trump inauguration….. it’s weird.
We know this puts Ellison firmly in Trump camp and against Bloomberg.
We’re lining up billionaires.
Bottom line, for better or worse, President Trump will defend Silicon Valley against foreign countries. Notice how quickly France backed down. And that would have cost Google/Facebook etc., BILLIONS of dollars.
PLUS, President Trump, via economy, has added significantly to their wealth during past 3yrs.
Turned everything around.
If Larry made 15 billion last year, he can afford to part with a billion to “insure” his empire.

POTUS is a terminal multitasker. He will check on coronavirus, Newscum, the wall, the Chinese threat etc. while here.

Its beautiful weather but theres smoke all through the area west of the desert due to vagrants starting a fire in a brushhy river through Riverside, and its dusty. Bernie Panders campaigned heavily in Riverside County last time and is winning this time. Bloomberg just opened a campaign office in Riverside on Bernie’s heels. POTUS may land AF1 at March ARB, the spot where the coronavirus people were held, unless he can land at Palm Springs airport. Im not sure about runway size.
I wish there was a public something going on and Id go!

Wow – what an interesting guy! And yeah, notice how much of a honey badger he is on supporting Trump despite all the SJWs working for him! Hilarious! Tech is filled with socialist dweebs now. Screw ’em! TRUUUUUUUMP!!!
What’s the story on refusing Bar Mitzvah? I found this much:

Although Ellison was raised in a Reform Jewish home by his adoptive parents, who attended synagogue regularly, he remained a religious skeptic. Ellison states: “While I think I am religious in one sense, the particular dogmas of Judaism are not dogmas I subscribe to. I don’t believe that they are real. They’re interesting stories. They’re interesting mythology, and I certainly respect people who believe these are literally true, but I don’t. I see no evidence for this stuff.” At age thirteen, Ellison refused to have a bar mitzvah celebration.[10] Ellison says that his love affair with Israel is not connected to religious sentiments, but rather due to the innovative spirit of Israelis in the technology sector.[11]

https://wp-en.wikideck.com/Larry_Ellison
I suspect he was already too much of a skeptic at that time. I can respect what he likely intended – to be honest about where he was at – but even if he disagreed with dogma, there is nothing wrong with declaring a love of God, which I sense somewhere in that pirate persona of his!!!

If he is as ruthless as the article indicates…I hope all those 2200 employees who presume to tell their boss to withdraw the invitation got their pink,slips.
Tail wagging the dog…they never learn.

Teagan – My thoughts exactly. If you don’t like the way your boss handles HIS company, you are more than welcome to go elsewhere, and don’t let the door hit you on the azzzz on the way out. 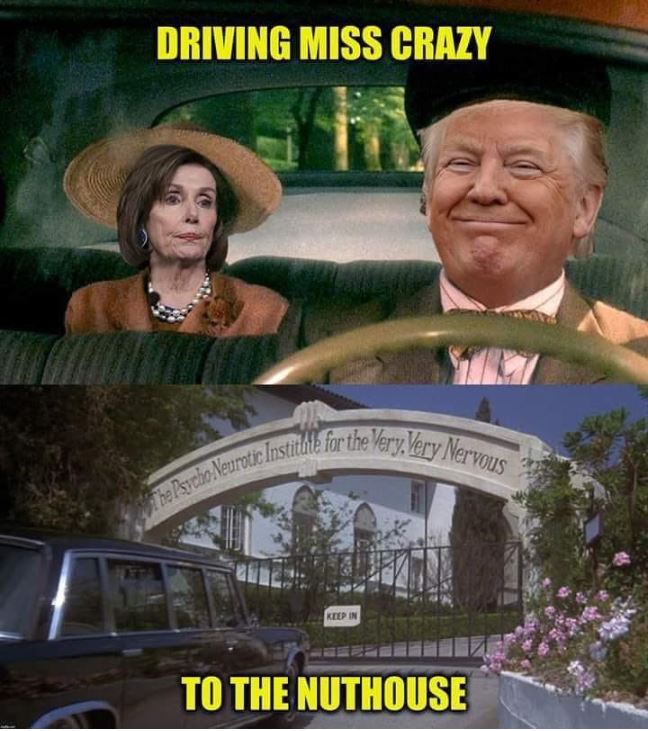 Hey I received a RNC survey for congressional district #8 today. Asking top five things in a number of area’s.
I felt special LOL

Oh, yeah – I got mine last week – same deal. They always ask for money and I tell them I donate to the Trump campaign directly and never to the RNC until they get their act together.

Regrettably, If they would just print those on one side they’d make great scratch paper…nice heavy stock.

So POTUS is flying in to Palm Springs airport tomorrow. Apparently 2 anti Trump protest groups will be there but THE SHERRIFF’S DEPT asked the Republican women not to go bc theyd antagonize the OTHER protestors and they said “ok” we wont go. Most of them are probably retirees and cant see theyve been played. Thats not acceptable but Im not in the desert.

Theyre corralling the proTrump people into a corner area off hwy 111 instead. High visibility if its recorded.

And you can bet the cameras will all be their grinding away showing how President Trump is being protested.
😠

I’m glad you cleared that up.
Originally had it as tomorrow, but it didn’t make sense………
rally in Phoenix starts at 7pm mountain time
can’t be in 2 places at one time

Nope. Hes in Beverly hills then flew to vegas to sleep. Sad he isnt safe here, even in his CA hotel. Then flies to Bakersfield in the am and back down to the desert then off to vegas again then the AZ rally, according to local media.
Course they highlighted obummer golfing first. Conservative area but not all the press. Some are, its better than zero.

Do you think he will be staying at Trump Las Vegas? It is a beautiful hotel – I was lucky enough to stay there once and will never stay anywhere else if I am in that area. I would assume that is what he is doing.

I believe thats where he will stay.

Hmm. I’m thinking Potus has leverage on Silicon Valley and it’s denisons. They are pragmatic enough to back him as they know he can’t be defeated

I cant believe that guys 75 holy shit I was thinking late 40s.

& he’s the only POTUS that doesn’t look a decade older shortly into his first term!

I see what you did there. Very slick.

He looks younger I think, I really believe the energy around President Trump has energized him.
God picked Donald J Trump for this time in World history.

Amen & Thank God for delivering us from so much evil by the hand of this magnificent man!

Here we go………
Planes and motorcades on the move.