About this moving we are watching…..

There are more good people than bad. The wizards and warlocks (inside term) will not allow another Satanic Evil POS control our country. Realize Soros, Clintons, Obama, Putin, etc. are all controlled by 3 families (the 4th was removed post Trump’s victory).

Manafort was placed into Trump’s camp (as well as others). The corruption that will come out is so serious that deals must be cut for people to walk away otherwise 70% of elected politicians would be in jail (you are seeing it already begin). A deep cleaning is occurring and the prevention and defense of pure evil is occurring on a daily basis. They never thought they were going to lose control of the Presidency (not just D’s) and thought they had control since making past mistakes (JFK, Reagan).

Sometimes it’s good to have a reminder that, really, we are in a war, and that just like the other side, we have to have people who infiltrated the operations arms of the enemy.

And who are these people who we fight for the soul of the nation that they really don’t recognize?

Dr. Angelo Codevilla wrote about them in his tome, The Ruling Class, in 2010. Rush Limbaugh described them in the introduction:

For twenty years, I have been asked, “Rush, why don’t the Republicans do X?” One answer I’ve settled on is that people never really get out of high school. Wanting to be part of the big clique dominates their lives. It’s a quest for power, for acceptance, for belonging to the “in” crowd, however it’s defined.

And the in crowd clique wannabes will do whatever it takes to maintain their grip on power. (As if we needed more proof that the “leaders” who are not psychopaths are not all that mentally strong.)

They also inspire others to mimic them via all means of propaganda without really understanding what they insult and want to malign.

Oh, and about the 2020 presidential election:

And now for some mood music:

Your weekly reminder to take the pledge:

The discourse on this site is to be CIVIL – no name calling, baiting, or threatening others here is allowed. Those who are so inclined may visit Wolf’s other sanctuary, the U-Tree, to slog it out with anyone who happens to still be hanging out there. There is also a “rescue” thread there for members of the Tree to rendezvous if the main site goes kablooey.

And Auntie DePat’s requests as we are all, ahem, adults, although some of us are beginning to wonder what the threshold for true adulthood is:

32As they were going away, behold, a dumb demoniac was brought to him. 33And when the demon had been cast out, the dumb man spoke; and the crowds marveled, saying, “Never was anything like this seen in Israel.” 34But the Pharisees said, “He casts out demons by the prince of demons.” 35And Jesus went about all the cities and villages, teaching in their synagogues and preaching the gospel of the kingdom, and healing every disease and every infirmity. 36When he saw the crowds, he had compassion for them, because they were harassed and helpless, like sheep without a shepherd. 37Then he said to his disciples, “The harvest is plentiful, but the laborers are few; 38pray therefore the Lord of the harvest to send out laborers into his harvest.” 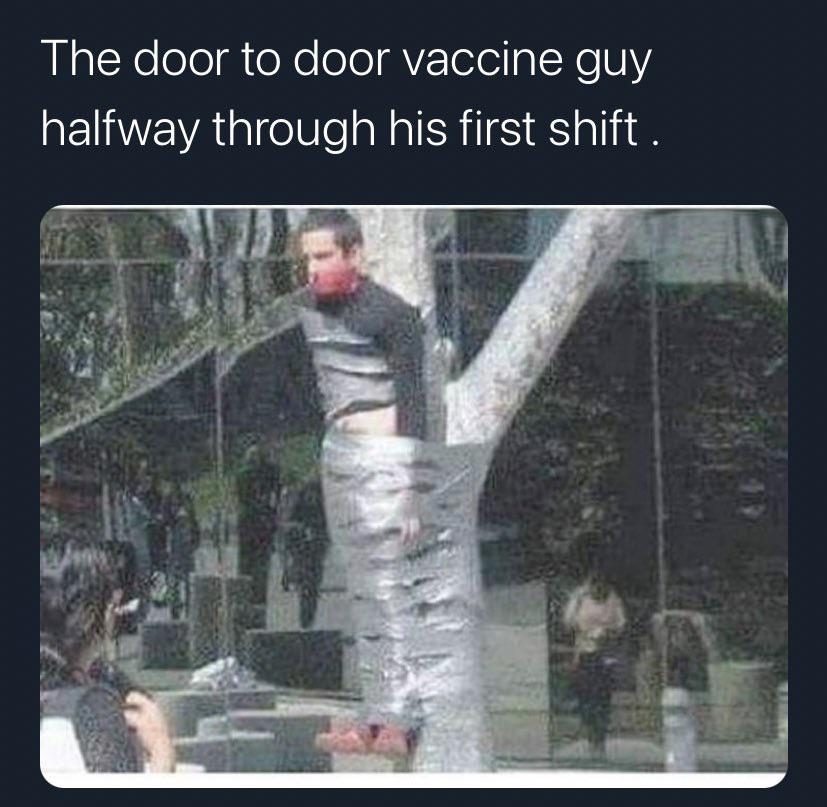 All that’s missing is the tar and feathers! 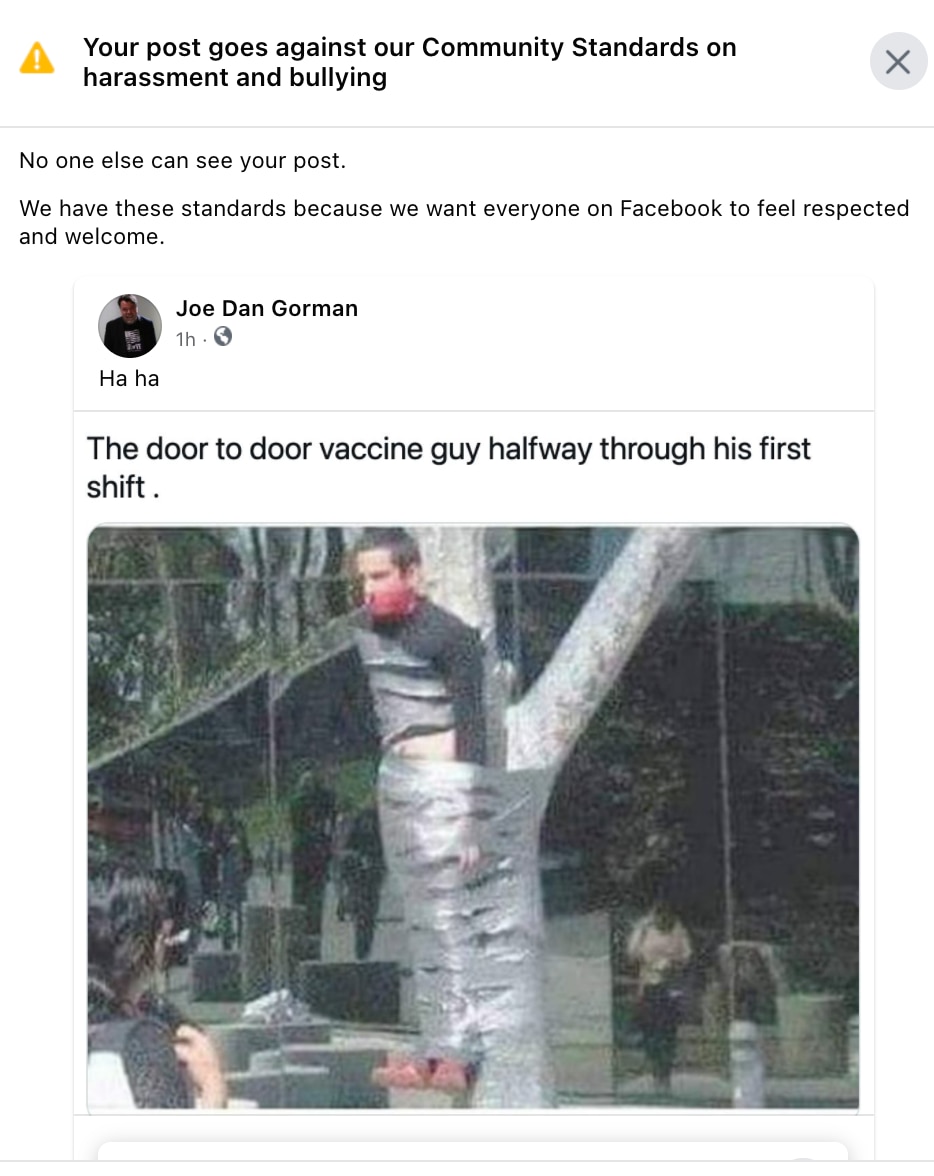 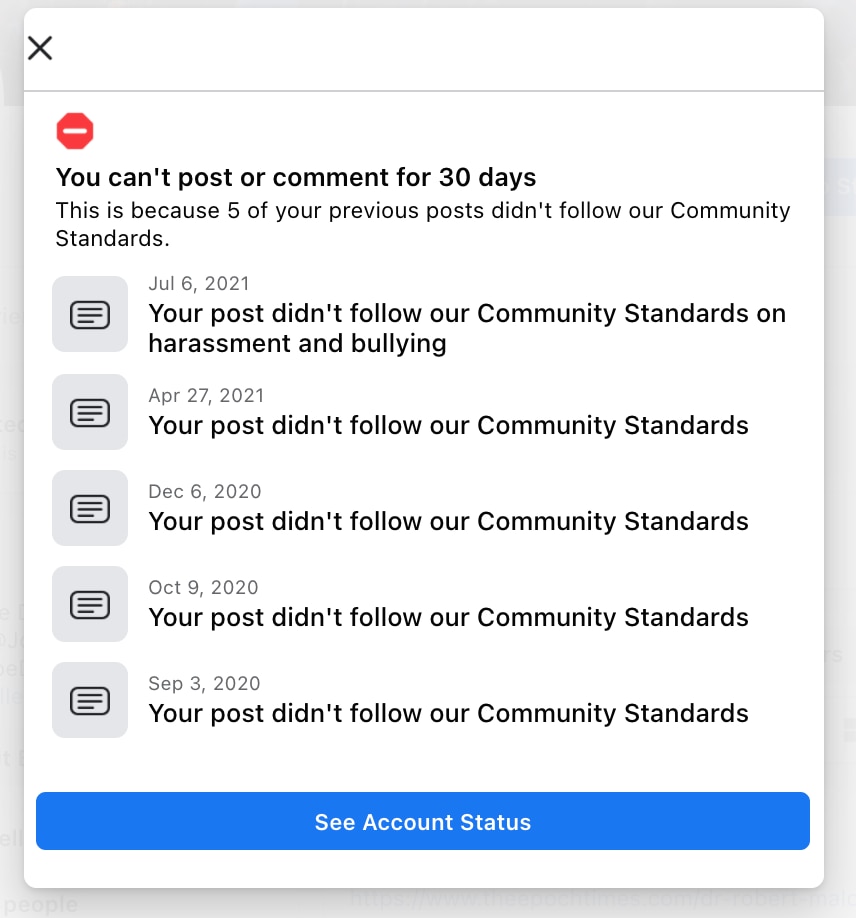 Slightly wrong. The image is upside down and he still has his clothes on. 😉

That door-to-door vaccination plan Jen Psucky just outlined should be called the "Kiss my ass and get off my lawn" plan.

After a few days of kvetching, Code MonkeyZ:

“I’ve registered the @codemonkeyz account on GETTR.
I’m going to be focused on Telegram and wont be posting on GETTR.
Just registered and holding the account as a placeholder so others dont impersonate me on the platform.

Remember, be careful with new platforms, do your due diligence to understand the platform, and take safety precautions as best you can.
124.0Kviews”

CodeMonkeyZ once had an imposter on Parler. The fake account was Parler-verified, and Parler refused to do anything about it despite CodeMonkeyz’s numerous and public complaints about the fake verified account. I can’t blame him for trying to prevent that from happening again.

Makes sense. Saying he learned Chinese so he could read ancient text about Kung Fu seemed way off.

I don’t find that any different than Christians who learn Koine Greek so that they read the New Testament in its original language. When you base your mindset off books originally written in a foreign language, then it makes sense to learn enough of that language to form your own translation/interpretation instead of relying on others.

Perhaps I stand corrected. Chinese text do go back to well before 500BC and given most such writings would have originated with learned persons they’d likely be warriors as well as scholars, so I guess there could be a thirst for such material in the west as it’s also fairly known how much various branches in the world of martial arts liked to keep things somewhat secret.

This is a problem I have run into many times. Sometimes there just aren’t English translations for the things I want to read. 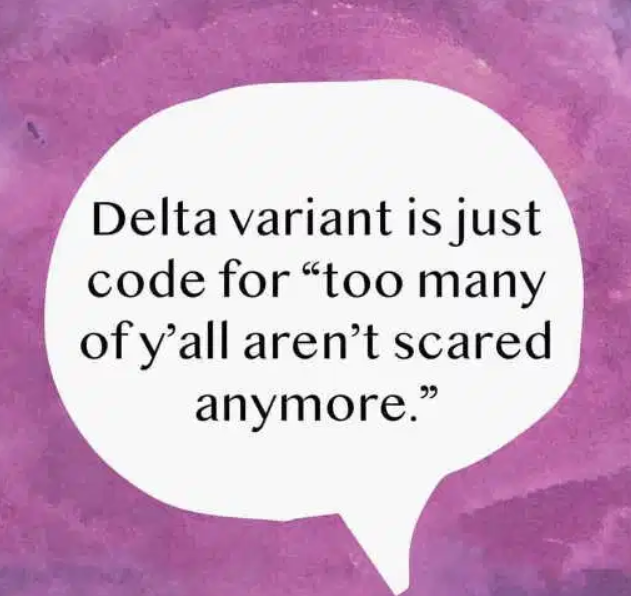 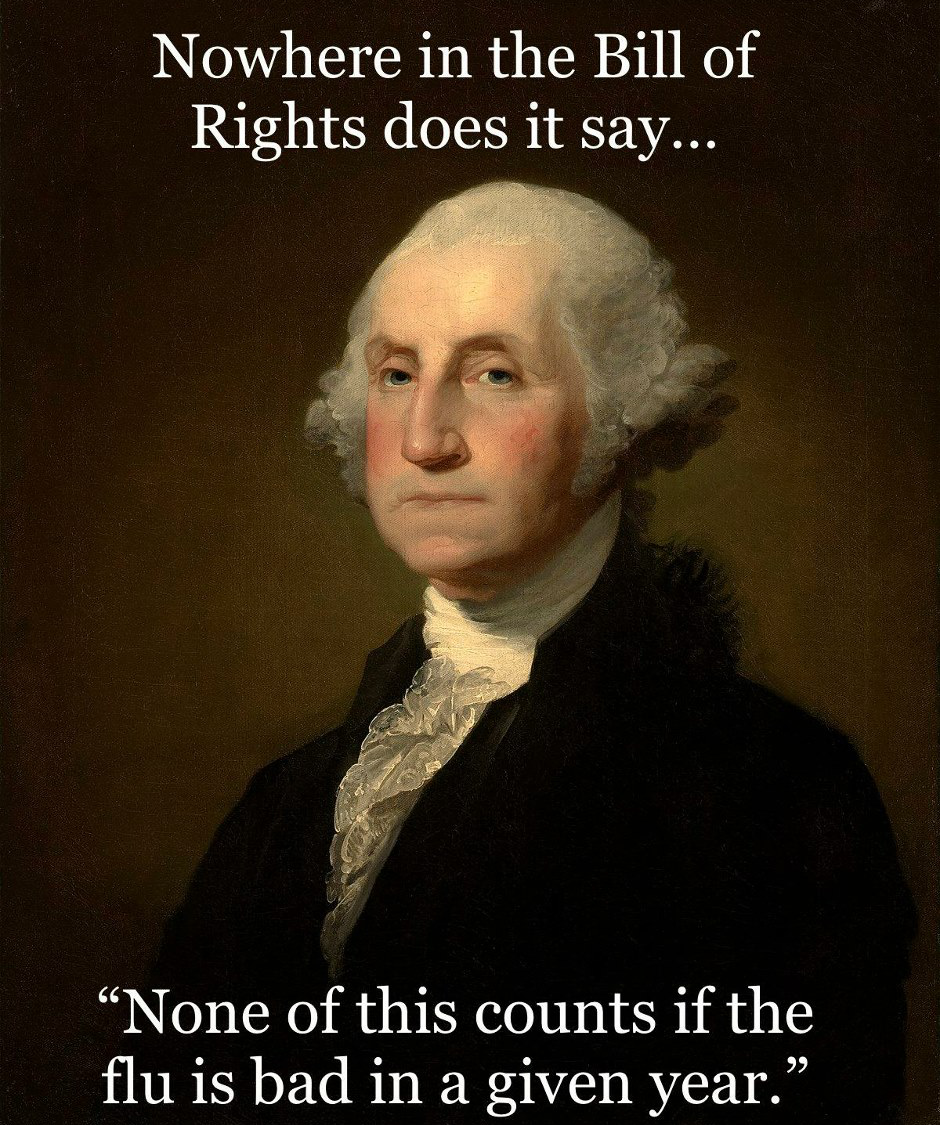 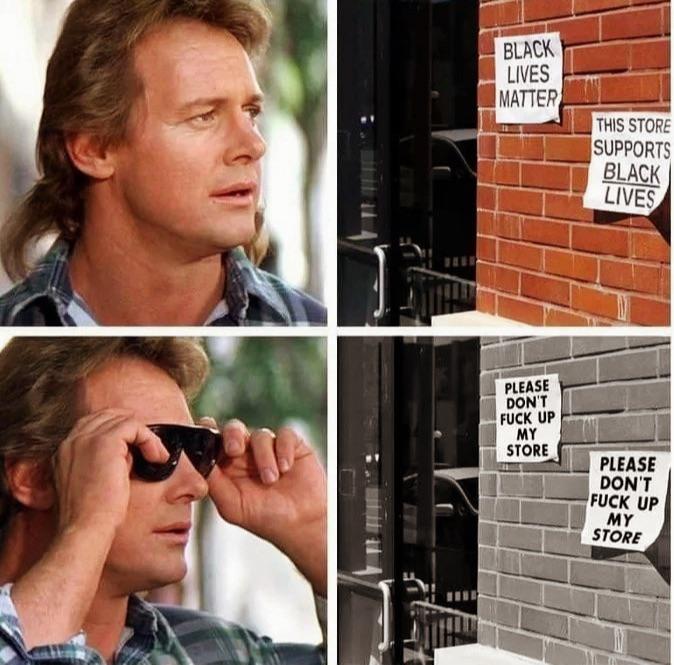 This is the one for proper governance of CA.
No celebrity or hashtag American.
The legislator who has challenged gruesome during lockdown. Kevin Kiley. 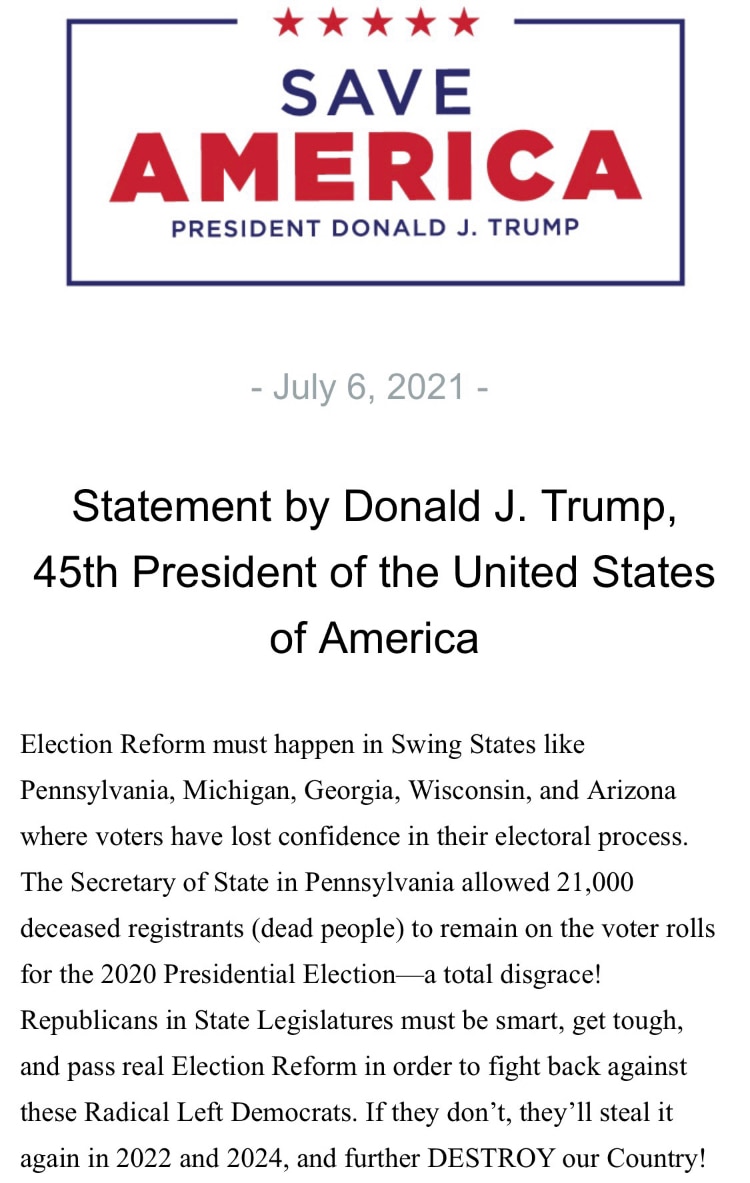 And an announcement tomorrow! 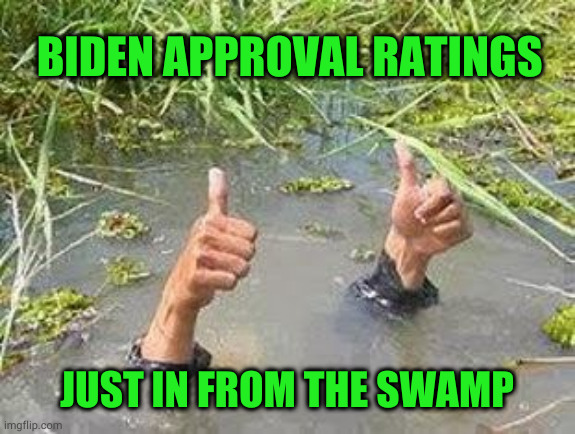 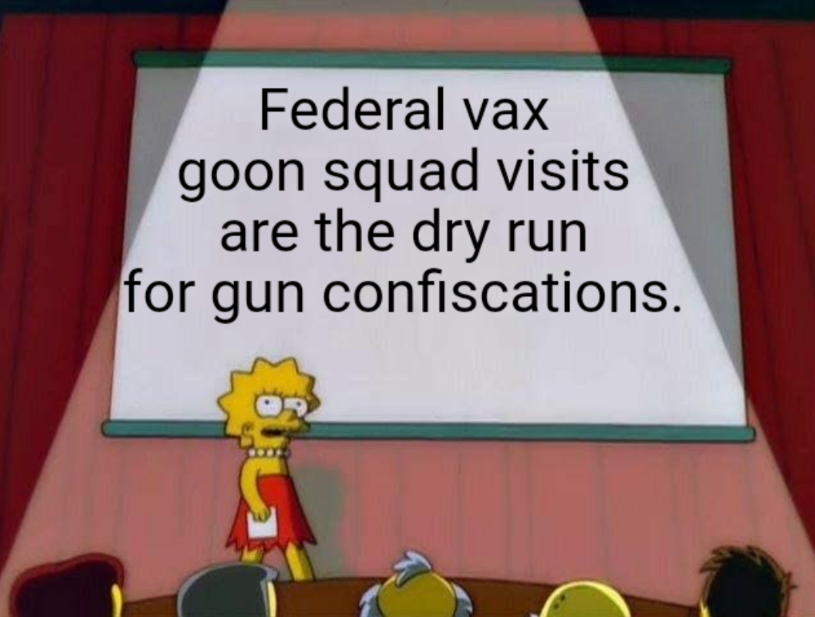 List of Vaccine questions they'll be asking door to door:
1. Hi fellow Patriot! Are you vaccinated?
2. Why not? IT'S SUPER FUN!
3. So, how many guns do you own?

Post no trespassing or no solicitation signs.
And for God’s grace please dont answer the door.
One thing to wonder is how they know which neighborhoods to go to and prioritize?

Yes. I imagine they’re going to “underprivileged” neighborhoods because they supposedly are “under-vaccinated.” But are they looking at medical records and hounding people based on that?

I hope they get lots of no-answers, or enough pushback to make them sorry they made the attempt. The kind where at the end of the day they’re so exhausted and verbally beaten up that they decide it’s not worth it.

Thats going to be videos and doorbell cams and people messing with these tools. Anyone who does this is a govt stooge. They have to expect it.

Silly me, I know.

Where big bother brother is concerned, nothing is private…

I usually don’t answer my door. Always soliciting. If it’s important, leave a note. I know when to expect my deliveries. And I’ve auto signed online, so UPS just drops packages on the porch now when signature is required.

We’re such a bunch of curmudgeons!

I’m always joking about parking out in the “curmudgeon section” of the grocery store parking lot.

Hey you kids… get off my lawn!

I use a package store becuase we have a lot of porch pirates. when sales people show up I engage with them. they never come back.

And we have another one! OANN just launched their own social media platform:

360
0
Would love your thoughts, please comment.x