And now to rev you up for declaring and celebrating our freedom from tyranny:

Right away, Independence Day was celebrated joyously. From PBS’ A Capital Fourth:

On July 8, 1776, the first public readings of the Declaration were held in Philadelphia’s Independence Square to the ringing of bells and band music. One year later, on July 4, 1777, Philadelphia marked Independence Day by adjourning Congress and celebrating with bonfires, bells and fireworks.

The custom eventually spread to other towns, both large and small, where the day was marked with processions, oratory, picnics, contests, games, military displays and fireworks. Observations throughout the nation became even more common at the end of the War of 1812 with Great Britain.

I think we all know how to celebrate this Civic Holiday. We all have memories of picnics and fireworks and parades. The importance of Independence Day celebrations in 2020 cannot be overstated. We are in a fight for the life of our beloved Republic. In that same PBS article, is a quote from Jefferson (his last letter) in which he wrote about the Declaration of Independence:

“May it be to the world, what I believe it will be … the signal of arousing men to burst the chains … and to assume the blessings and security of self-government. That form, which we have substituted, restores the free right to the unbounded exercise of reason and freedom of opinion. All eyes are opened, or opening, to the rights of man. …For ourselves, let the annual return of this day forever refresh our recollections of these rights, and an undiminished devotion to them.”

Back when my kids were small, we celebrated the Fourth of July with special outfits (my mom would sew matching patriotic outfits for my kids to wear) and we would pack a picnic and head off to watch fireworks. One year we were in Boston and headed out early to secure a place near the orchestra.

It was so exciting to be in Boston for an Independence Day celebration and listen to the Boston Pops on the Esplanade. The place was so crowded that our little blanket spot was trampled by fellow citizens trying to secure spots, or move from one spot to another!

People would actually step over our children on their way to some other place! I’ll never forget it. Human nature. 🙂 But once the music started and everyone settled down, it was wonderful. The fireworks were brilliant, even if the kids were sleepy and we were all exhausted.

What mattered is that thousands of Americans gathered together to celebrate our freedom. The energy and patriotism could be FELT. Celebrating our Civic Holidays is vital to maintaining a patriotic spirit.

Nowadays, our children take their kids to the fireworks displays in their locales. If they happen to be around, we head out to the back 40 and have a big bonfire and our own fireworks. The kids have sparklers and we share a summer picnic meal. We might even shoot off a few guns.

This year, I think I’m going to share a few good books with the grandkids and maybe watch some patriotic films. I want them to know that they have “certain unalienable Rights, that among these are Life, Liberty, and the pursuit of Happiness. — That to secure these rights, Governments are instituted among Men, deriving their just powers from the consent of the governed…”

If we don’t teach them, who will? Not the schools. Not even most churches. Certainly not a bloated bureaucratic state that seeks to tell us what meds we can and MUST take, and whether we have the right to leave our house without a face mask!

It’s time to declare our Independence Day! Just over four weeks away, the Fourth of July 2020 is on a Saturday. Let’s celebrate it like our freedom depends on it!

A New Nation: The United States, by Betsy Maestro (Grades 3-5)

Presenting the Declaration of Independence puzzle

We The People Board Game

This Land is Your Land, by Woodie Guthrie, illustrated by Kathy Jakobsen (All ages)

Yankee Doodle, A Song From the American Revolution, by Todd Ouren, a history of the song, lyrics and activities for children

Here is an exhibition from the Library of Congress called Declaring Independence: Drafting the Documents. It ha s a wonderful online exhibition with a timeline.

The Patriot with Mel Gibson

Independence Day with Will Smith

The Green Berets with John Wayne

I could go on and on. I hope you all will share your own great films, books, recipes, traditions and memories. Let us celebrate our great Republic, its founders, and the freedoms we need so desperately to retain and pass on.

Take Back Our History

Needed: An Army of Mr. Smiths

Grandparents of the World, unite!

Excellent ideas for building appreciation for our heritage and for teaching our children and grandchildren the meaning and value of our nation’s history, principles of government and prized liberties!
I’m going to try to collect some of those movies.

Yes, my film collection is growing by leaps and bounds. 😁

Independence Day makes me cringe with its utterly unrealistic–hell downright stupid–“upload a virus” storyline…BUT it’s otherwise absolutely kickass.
Martina McBride’s song is largely not about patriotism…but then again it IS about justice, and when she breaks out into “Let Freedom Ring….!” who cares what it is, and is not, about!

I had no clue what that song was about, having only heard snippets of it on Hannity’s radio show, until I watched the video just now. It’s a heavy topic, but she does sing about freedom.

True enough–just not the kind we usually think of here (freedom from governmental oppression). Her situation was much more up-close and personal.

Hi Texan grandma! This brought back a memory, my very 1st fireworks show. I was maybe 4 or 5 yrs old when my grandma took me & my sisters. Having no idea what was about to happen, I was terrified right off. (They throw up the cannon boomers 1st) I just knew we were all about to die. Grandma had to take us outta there with me running and screaming all the way to the car. 😆 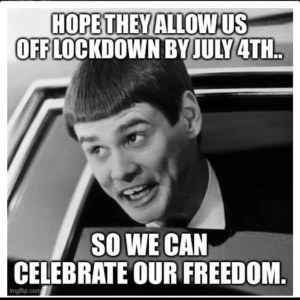 My sisters weren’t impressed and didn’t let me live it down. One being almost 2 yrs younger even 🙄😆

As you have said, in this and the other posts in this series – to reach children – make it special – with what children love – family traditions, outings, picnics, games, crafts, decorations for patriotic holidays….memories and momentos to hand down to their children.

Good one! Mr. Smith Goes to Washington is also a patriotic movie about one Deplorable standing for what’s right.

I’m Just A Kid . . .
The parade is coming down the street,
Uniformed men and women march along.
It was all grown-ups that fought in the war;
I’m just a kid, I don’t really belong.
A few floats pass, lots of soldiers and flags,
And a big marching band that played only drums.
Some horses go by, and more flags and floats;
Each float looking like the next one that comes.
My uncle stood near, watching the parade.
I guess I looked bored, ‘cause he turned and said,
‘I’ll bet you don’t know how kids helped in wars;
When the grown-ups left, kids filled in instead.
During the Revolutionary War,
Andy signed up when only thirteen,
Was captured, his hand slashed to the bone,
For British boots he refused to clean.
Sybil rode her horse all night long,
Going twice as far as Paul Revere,
To warn the towns “The British are coming!”
For a girl of sixteen, she showed no fear.
When men left home to fight in the war,
The kids took over to do all the chores.
When the boys followed and signed up, too,
The girls stepped in and did even more.
In World Wars I and II some kids lied
To sign up to fight when they were too young.
They served with the army and on ships,
They were all heroes, mostly unsung.
The kids went out and found paying jobs,
Made their own clothes and grew their own food,
Sold millions of dollars in war bonds,
And collected recyclables to be used.
There was no doubt, when it came to war,
The kids did their part to help the cause.
They joined to fight, worked, scrimped and saved,
They deserve recognition, thanks, and applause.
Well, I looked, and still no kids marched by,
But the next to last float was full of kids;
Some in uniform, others doing work,
Helping the effort, that’s what they did.
When it comes down to helping our country,
Us kids pitched in to get us all through.
Now, when I stand to salute our flag,
I know that it waves for us kids, too.

So very true. In war, even the kids are enlisted. Thank you, Carl.

October Sky is a very inspiring movie – especially with the return of the US to space exploration.

Haven’t seen it. Will check it out!

20
0
Would love your thoughts, please comment.x