The Trump rally of October 2, 2018 in Southaven, Mississippi will long be remembered as one of his best.  Fully calling out the RISKS to America from the SOCIALIST Democrats in the 2018 midterm election, our VSG POTUS pulled no punches, yet spoke such plain, unarguable truth, that it would be impossible to ignore his warnings about what would happen to America if either house of Congress were to fall to the Democrats.
But that’s not why we’re here.  We are here to observe the “curly-Q” that our President Donald J. Trump / 45 / 4-10-20 made RIGHT at the moment of “we will make America great again” at the end of his speech.
Watch it here in screenshots.  It is a cursive “Q” drawn from HIS perspective, COUNTERCLOCKWISE, or CLOCKWISE from our perspective, entering from the top, then circling left, around once, and out the bottom right.
In pictures taken from this video feed: 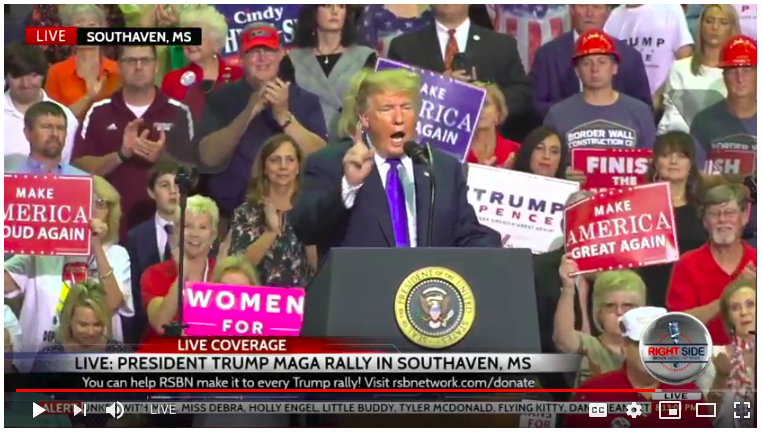 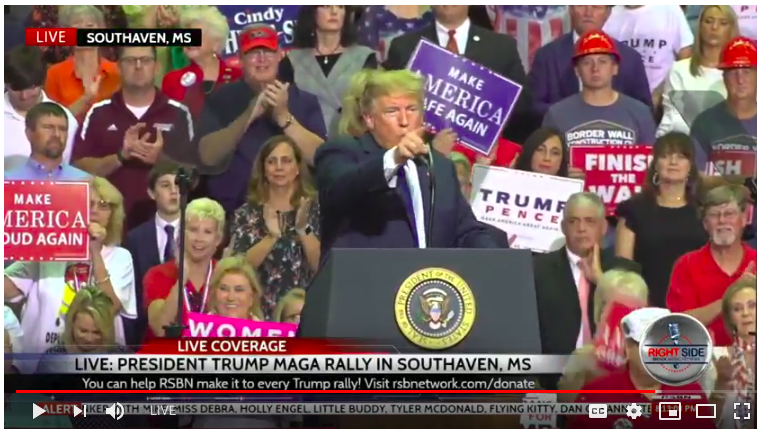 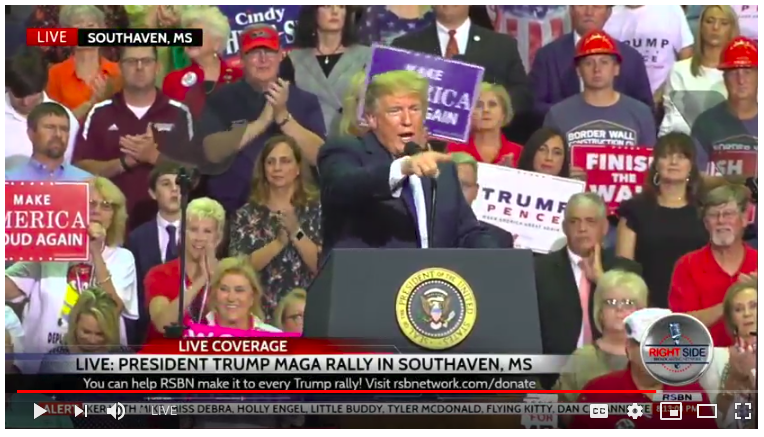 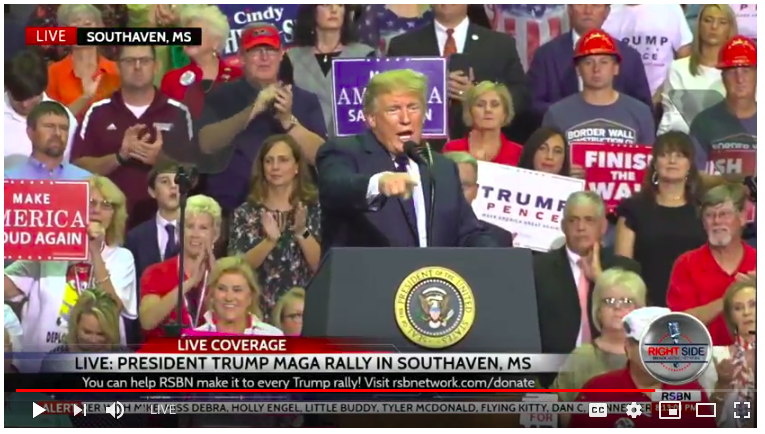 5. Circle back up the other side of the Q (his right, our left)… 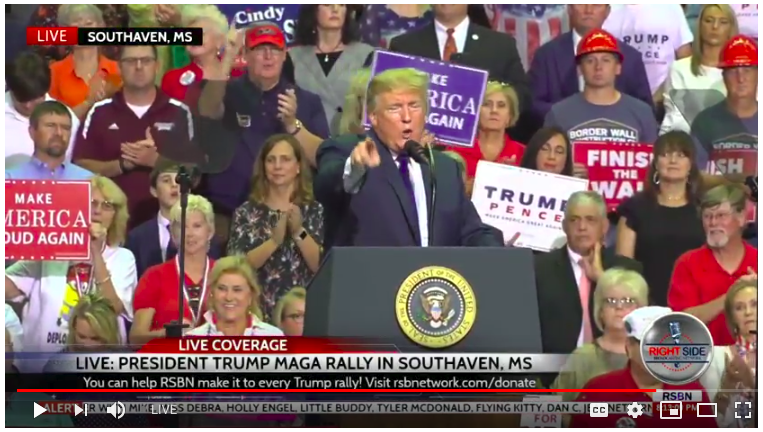 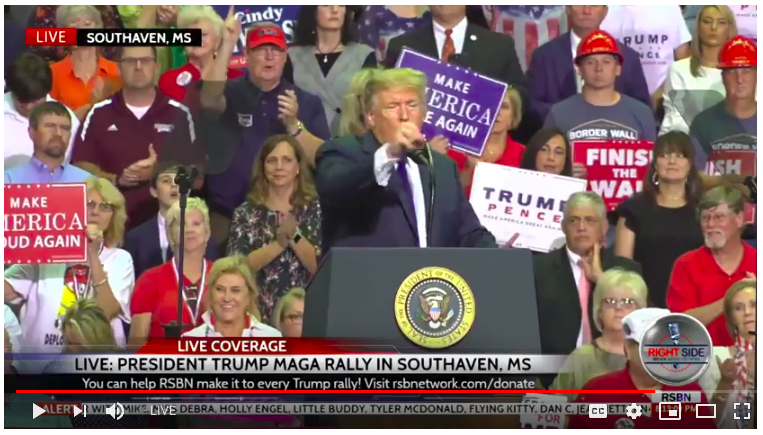 (Notice that there is some visual distortion of the hand at this point, due to speed.)
7. Circle back to our right, his left again… 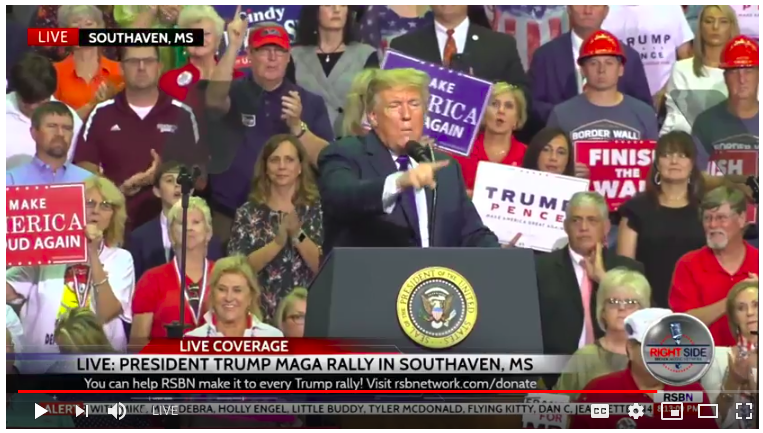 8. Circle back to the bottom again…. 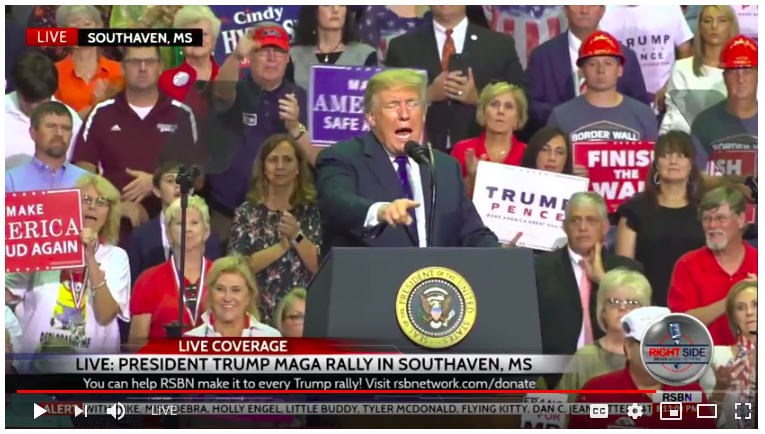 9. He holds it right there for a short time – you can see that the introductory image (top of this post) was also taken from around this moment.  THEN he pulls it back in toward himself, as if lifting a pen. 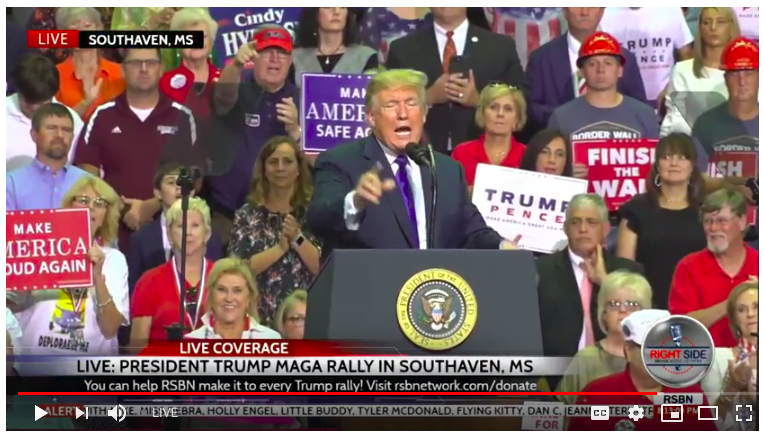 10. Finally, he pulls back both hands, holding his palms toward the audience…. 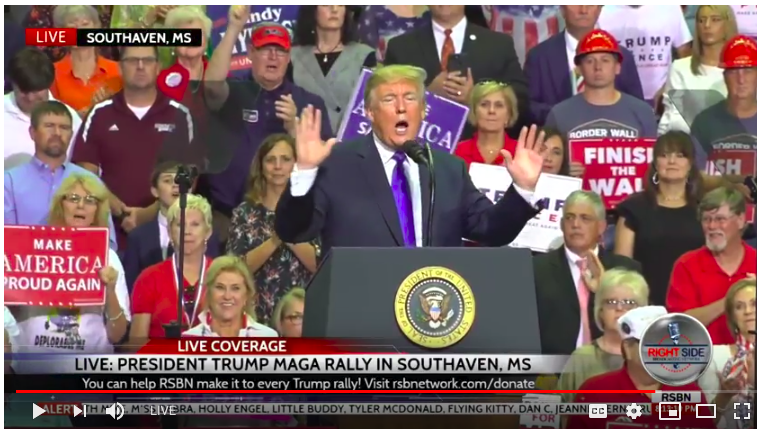 Thus making a Q CLOCKWISE as WE see it (direction of the motto)…. 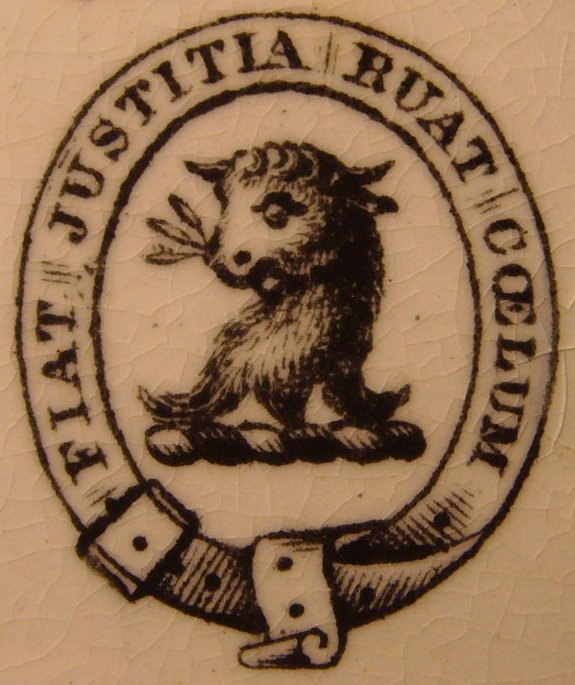 Or COUNTERCLOCKWISE as he sees it (still direction of motto)…. 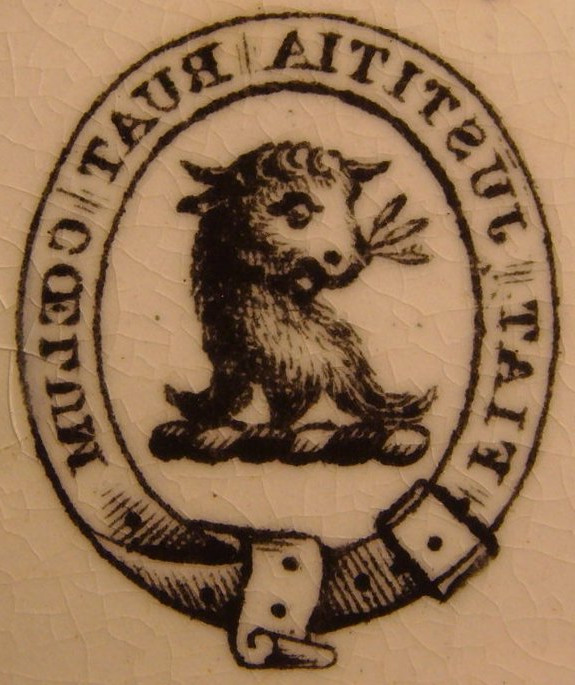 President Trump said something toward the end of the rally, about the Fake News media starting to get it – starting to understand.  Yup.  I agree.  Narrative switch on Q coming – but not at the moment THEY choose.  At the moment that the VSG chooses.
W

Our Lion has no fear.

He knows he’s on the winning team.

This isn’t the first time that PDJT has done one of those ‘Air Q’ motions, either.
It’s always very subtle though…like this time.
Heheh.
That way, we-the-Q-army can notice it and see it for what it is…but the normies just think that he’s motioning to the crowd.
Thanks for doing the screencaps and documenting this one, Wolf.
I love it!
This was a great Rally, wasn’t it.
He really took the gloves off in talking about Dr. Fraud.
Hah.
The propaganda nozzles will be hyperventilating about that tomorrow, I’ll bet.

Excellent prediction, wheatie! First question that Sarah Sanders got was RE the tough love that Dr. Fraud got from VSGPOTUS! 😉 LOOOOOOL!

Wheatie you had me chuckling with your “propaganda nozzles” still lolling.

Another big thank you to Wolfmoon. Let no man say that these rallies are all the same! I missed it…was listening but cooking. Can he top Tennessee tomorrow night?!? Will he reference the Baker testimony, today’s capitol arrest, the AG subpoena? Inquiring Q minds are patient…..

Did you see the latest Q-drop from a couple of hours ago?
Q posted this tweet…and then elaborated on Dr. Fraud for the rest of the post.

Ford is not just a liar, she is a puppet. As a former CIA polygraph examiner with a masters level (DOD/CIA) degree in forensic psychophysiology, I can tell you with certainty she has been coached to lie. Also, note her breathing during the questions. https://t.co/CjTuCkE0tN

.
This Kevin Shipp has some very interesting tweets in his twitter feed.

I have used the term ‘Deep Left’ sometimes.
Shipp uses the term ‘Dark Left’…which I think probably refers to the same thing I was referring to.

"Professor" Ford, the Deep State/Dark Left plant. Let's all learn from this and fight back.https://t.co/WtzLb22AfW

This is so sick and twisted!

Targeting the innocent. Drag queen brought in to influence children. And we stay silent? https://t.co/QTpfk96WIi

UN to create a Czar "to oversee the normalization of homosexuality and transgenderism around the world." Planned Parenthood to fund transgender presentations – to second graders. More fertile ground for global pedophilia? Indoctrination of young children. https://t.co/HylUMO05V3 pic.twitter.com/sufOifPTH9

Yes…and also ‘grooming’.
They are grooming the little kids for being pedo victims.
That way, the poor little ones will think that there is nowhere to run, no one to report it to…because they’ve been taught that pedophilia is ‘normal’…and is a part of being a little kid.
These people are evil!

A recent article by Mark Judge
https://stream.org/when-the-washington-post-spiked-my-sex-abuse-tip/
And this from 2014
https://www.realclearreligion.org/articles/2014/05/03/if_these_hollywooders_were_priests.html
Mark Judge is a whistleblower. Certainly hope his FBI interview leads to further investigation.

Fascinating. I think this is definitely related to the targeting of Kavanaugh.

The more we know… akkk! In this Kavanough drama everyone is someone..(Bernie Ward and more OMG!) All these connections and none of this is normal, and then the connections spread to the wider theater / deeper fight, but we know this… (not the particular thing you brought us Mary, but we do now). I’m just surprised how much keeps coming out. More proof of how deep all of this runs. Good catch.
Mark this for the deep fight. Meanwhile the close fight remains -those who have tried to take down a sitting president-. Q’s staying focused (this being Wednesday night going into Thursday morn) Focused better than most considering how many don’t take Q seriously.

Most sickening thing I’ve ever heard in my life. And RBG on Supremes is, I have read, involved with NAMBLA.

Good grief that is the first time I noticed the Q in that coat of arms.

I love it! That’s why I chose it as a site emblem!

I wondered about that coat of arms and how it related.

YIKES! Thanks for the catch!

OT but…someone at CTH beat me to it, saying that our long national nightmare will soon be over. (Direct allusion to (POTUS) Ford’s comment about Watergate.)

26
0
Would love your thoughts, please comment.x