So it has begun, frens.

The great battle of our time.

For free speech, our civilisations, and everything cozy in this world.

Gab is inevitable. Our community has grown to the point where the GOP can’t simply pretend we do not exist anymore as they have for five years. Now they must attack and defame us like the left does. Our community will primary every last one of you in 2022. Every last one.

Yes – even the Texas GOP stood up for Gab without flinching – and without attacking Gab’s attackers. SOMEBODY actually gets FREE SPEECH!!!

This was all in response to Gab being somewhat stupidly criticized by Governor Abbott during a photo op with two state reps touting an antisemitism bill.

As I’ve said before, NOTHING has done more to wash out the antisemites at Gab, than the massive influx of normies simply seeking free speech.

Every month 30 million people use Gab’s services to get access to the free flow of information online. Gab is the home of free speech in a world where Big Tech oligarchs have censored, deplatformed, and demonized tens of millions of good, honest, and decent people with whom they disagree politically.

Tonight Texas Governor Greg Abbott, a “Republican,” issued a despicable and false statement smearing Gab as an “anti-semitic platform that quote “has no place in Texas.” This is the same Gov. Abbott who just five days ago said he was “taking a stand against Big Tech censorship.”

Gov. Abbott’s statement will likely not sit well with the nearly 800,000 Texans who have visited Gab.com in the past 24 hours alone. What is even more strange is that the Texas GOP itself is on Gab with a verified account.

Gab is not an “anti-semitic” platform. We protect the political speech of all Americans, regardless of viewpoint, because in this age of cancel culture nobody else will. That means unpopular viewpoints may be found on the site.

The enemies of freedom smear us with every name in the book because they hate America and they hate free speech. It’s a shame to see a GOP politician fall for this trap when conservative values are under sustained attack all over the country.

There are many Jewish Gab users and customers, whose lawful speech we protect with just as much zeal as we would protect the lawful speech of any person of any faith, ethnicity, or creed.

This is what America used to be like: a place where The People could speak freely regardless of their faith, ethnic background, or beliefs. This is the America Gab is fighting to preserve.

The bottom line is that Gab is one of our last bastions of Free Speech.

One way you can help, is by sending some money to Gab – either as a donation, or as a “PRO” membership.

So what do you GET if you upgrade to PRO?

How much does it cost?

You can even buy a GIFT subscription for another account. You can pay with a check or money order, an E-check (very conveniet), or Bitcoin.

But most of all – Gab is COOL. As in #SuperCool.

…..and while you may not consider yourself “super-professional” if you’re retired like me……

…..so maybe you want to use the encrypted chat feature…..

We’ll be waiting there for you!

Gab also allows donations and sells t-shirts and such. I like the Pro account, but you don’t have to get one to be generous in support of their platform.

I love that they are branching out. Gab.tv is brilliant.

I love that normal conversations in groups about Rural Life of Photography can refresh my soul in between rounds of praying the news.

Gab Artist Series featuring @emerson_chris
MADE IN THE USA 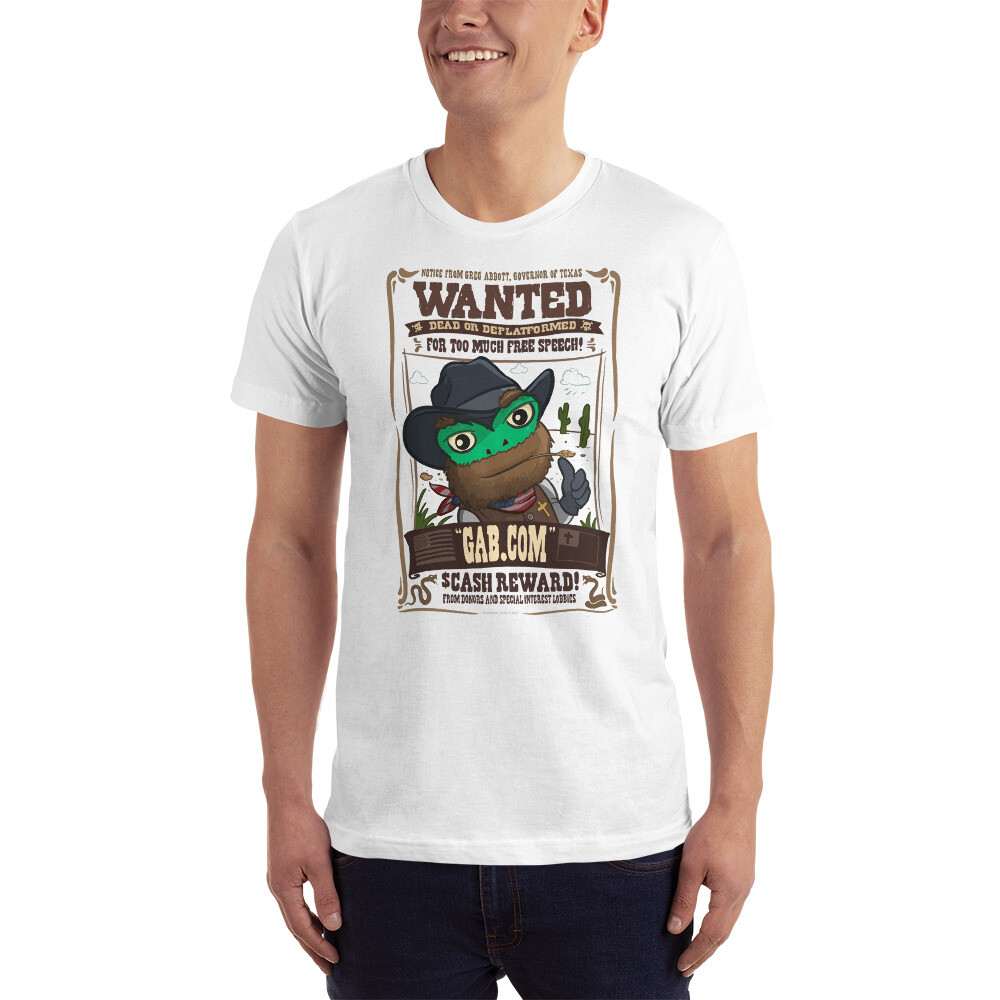 Joe Pags has a long discussion of his interactions with both Torba and Abbott in a video, starting at around 19:00 (takes him a long time to get to the point, but he’s easy to listen to!)

Hehehe. I’ve been on to him for awhile. He is in the mold of Cornyn.

Hope Gab can get their security issues solved. And hope Torba can make peace with the Trump family after he accused Jared Kushner and Scavino of keeping Trump off of Gab. The Trump family and lawyers may have wanted him to maintain ‘radio silence’ for a while for legal and strategic reasons.

IMO Gab can never get them solved now. .gov is under the control of the Dark Side. FIB will hack whoever it wants with NSA’s help, and make it look like trannies.

The dark side will ALWAYS go after Gab.

If Trump gets on there, FIB WILL HACK.

Gab is too front-line in the fighting for Trump. Better to keep him off, IMO. Torba would be pressured to compromise on free speech by the RINOy elements in Trump’s entourage.

He spied on the media, Congress, and of course, Donald Trump and his family. So much that Trump called him a sicko.

He changed the law 3 times to make it easier to do no warrant surveillance.

We saw what he did with FISA warrants.

YUP. Radium Rod was doing it, too. He was the one who went after Attkisson. THAT was the hold that the dark side had on Rosey.

DEPARTMENT OF CRIMINALS IN CHARGE

I admit to being excited about Vocl.

In the meantime, I got My Pillow towels.

The best. He puts out consistently excellent products.

I am an absolute fan absolute FANBOY of “MyPillow”!!! One of the best products EVER.

More competition on the way. Mike Lindell is coming out with VOCL in the next 10 days to 3 weeks. Supposed to be a combo of Twitter and Youtube.

The problem, IMO, is we need Twitter, FB, YT ‘like’ replacements, ‘centralized’ repositories where EVERYONE congregates – WITHOUT CENSOR. We currently have some on twitter, FB, gab, parler, other home growns. EVERYONE is scattered.

Right now Global and Local Government Agencies, Companies, and News are primarily on Twitter, Facebook, and Instagram. They must be forced to either migrate or expand to new platforms.

We’re waiting for TRUMP. I suspect that wherever he lands, that will be the replacement. Once we have the replacement(s), then everyone can abandon TW, FB, and YT and drive the leftist commies out of business.

Gab MUST mend it’s relationship with team Trump if it wants to be a contender, IMO.

If Gab has to submit to Fake Freedom of Speech, then I say no way – don’t even try to “be a contender”. Never kiss the ring of ANY anti-speech pressure group!

Torba would rather have free speech than Trump’s speech, and I’m 100% behind that.

I’d rather be on a site with antisemites, Bolsheviks, and even Democrats, than on a site that says one of them has to go!

I agree! If you are too big a pussy to handle someone else’s free speech, no matter how repugnant you find it, get the hell off of social media!

It wasn’t that long ago when people COULD speak that freely! And we want it back!!!

So how does one do Pro without giving Gab any more info than they already have on you?

The three options are E-check, Bitcoin, and a mailed check.

You can view these by simply clicking on a “purchase” on the PRO page, and it will give you a page with radio buttons on the three options.

The E-check asks for the most information. You basically give it as much as you would for any E-check purchase – like using a credit card. Name, address, phone number, etc.

The Bitcoin option gives you a wallet address and a QR code to which to send the money, when you’re ready. That MAY be the least info.

The snail check option gives you a code to write on the check along with the username of the account getting the boost. You mail to the address they give you. They don’t mention it there, but they take a wide variety of checks, including money orders.

In all of these options, the upgrade can be submitted from a DIFFERENT account, because there is a “Note” field which is for gifts – just enter instructions on who gets the pro upgrade (by username).

I finally went pro a few months ago….felt compelled to support them in this effort. Did the lifetime membership…..the MSM narrative around the Jan6 ‘fable’ was what made it (for me) very ‘now or never/put up or shut up’ in my humble opinion so I put ALL the chips in, so to say. Used the savings from not spending on outings during 2020 lockdowns ….

I hope that everyone can support in whatever way they can. ﻿🕶﻿

Thank you! I would go lifetime – and maybe I will soon.