This Night before Daughn Thursday 20191219 Open Thread is Open – VERY OPEN – a place for everybody to post whatever they feel they would like to tell the White Hats, and the rest of the MAGA / KAG! / KMAG world (KMAG being a bit of both MAGA and KAG! You can say what you want, comment on what other people said, and so on.

However, we have a new policy. Starting 20191110. Keep it SOMEWHAT civil. We have a new board – actually a new SITE – called The U Tree – where people can take each other to the woodshed without fear of censorship or moderation. NOT HERE. This board will remain a REFUGE for those who need civility, either some or all of the time.

They tried to FORCE fake Orwellian civility on us. In response, we CHOOSE true civility to defend our precious FREEDOM from THEM. Our rules began with the civility of the Old Treehouse, later to become the Wolverinian Empire, and one might say that we have RESTORED THE OLD REPUBLIC – the early high-interaction model of the Treehouse – except of course that Q discussion is not only allowed but encouraged, and speech is considerably freer in other ways. Please feel free to argue and disagree with the board owner, as nicely as possible.

Also remember Wheatie’s Rules: •1.No food fights. •2.No running with scissors. •3.If you bring snacks, bring enough for everyone .

Yesterday sure was a day to remember wasn’t it? Q drops, ScamImpeachment and Horowitz hearings.

Some days the sh*t comes down so hot and heavy it’s hard to take in all in and make sense of it all!

I’m not worried though because we have the Best President Ever.

However he may be getting irritated with The Swamp

As I sit here early afternoon 12/18 getting this post put together I confess I’m getting old and I need my sleep. So tonight 12/18 another Rally courtesy of POTUS Trump and I try not to ever miss a Rally and AG Barr @ 7:00 pm!

It will probably be 9:00 or so and this old guy will start nodding off but, The QTree NightShift will be here so MAGA ON.

And some people do not believe the big guys will fall… or even pay.
Scorched earth coming baby…
And don’t forget… ya don’t mess with Donald J. Trump or his family… payback is 10-fold

After a year of President @realDonaldTrump & our Administration traveling the country & working hard on the #USMCA, the House has finally passed the largest trade deal in American history. The #USMCA will create jobs, add to our economy & allow America’s workers to compete & win! https://t.co/oCcDKPbpsJ

I’m wondering who the two Republicans are who voted against it, and why.

63,000,000+ #Deplorables are now energized and ready to refresh the Tree of Liberty. @Democrats have called for #CivilWar2 and it is time to give it to them. @RepAdamSchiff @SpeakerPelosi #Impeached45 @realDonaldTrump @HouseDemocrats pic.twitter.com/fyPOXK6eIa

bottom got truncated… Wheatie showed me how to do this 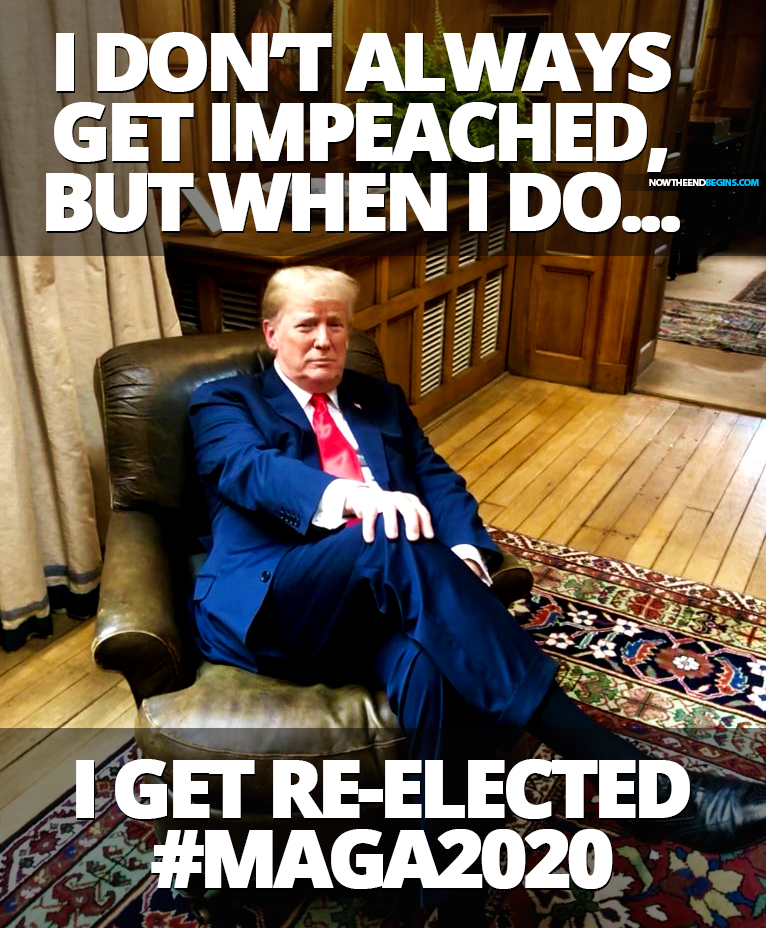 Merry Christmas from President Trump and the First Lady

She looks gorgeous in anything she wears!!!

Oh, missed them. Thanks.

Are they going to recess??

Senate not quite wrapped up. McConnell doing wrap up. But he asks the Senate stand in recess subject to the call of the chair

As quick as they can run out the door….recessed until January 7th.

That was my first thought, too, when watching that video…’doesn’t look like MBS’.
Prince MBS is taller than the guy in the video.

Guys making cell phone videos in the near foreground didn’t even flinch!
The guy getting into the front passenger seat of the red SUV realized he was being videoed and decided to do a “Dukes of Hazzard”!

UH OH –> Democrats' impeachment expert who testified in their hearings just wrote that Trump is actually *not* impeached until Pelosi sends the articles to the Senate.

Looks like the media need to update their big headlines! https://t.co/kCKo9n3iVB

In other news, the Democratic Debate is on, Billy Graham’s magazine loudly denounced President Trump, and USMCA passed the house.

So Christianity Today is saying Pres. Trump acted immorally on the Ukrainian phone call and that he has other moral shortcomings.
https://centurylink.net/news/read/article/afp-us_evangelical_magazine_calls_for_removal_of_gross-afp/category/news
The article also says the Graham family is no longer associated with the magazine.
As a Christian, I’m biting my tongue. Spare me from seemingly self-righteous “Christians” who stand in judgment and think we have to have pastors or Sunday school teachers in positions of leadership. I highly suspect there is something else going on here. Some political affiliation, or money changing hands, etc. It’s just too “Church Lady.”

Trump isn't impeached til House transmits to Senate, per a Harvard Law professor who was a witness for House Democrats.

“If the articles are not transmitted, Trump could legitimately say that he wasn’t truly impeached at all,“ @NoahRFeldman writes. https://t.co/urzhneXlo8

LOL ok that made me laugh.

I am no expert, but when I read the Constitution I don’t see anything about articles of impeachment having to be presented to the Senate in order for someone to be impeached. It does not say that “impeachment is a process, not a vote.” It seems to clearly separate what happens in the House (impeachment) and the Senate (trial). I would love to see some expert arguments about this issue.
Relevant portions of the Constitution, per Wiki:
https://en.wikipedia.org/wiki/Impeachment_in_the_United_States
_________________________________________
Article I, Section 2, Clause 5 provides:
The House of Representatives … shall have the sole Power of Impeachment.
Article I, Section 3, Clauses 6 and 7 provide:
The Senate shall have the sole Power to try all Impeachments. When sitting for that Purpose, they shall be on Oath or Affirmation. When the President of the United States is tried, the Chief Justice shall preside: And no Person shall be convicted without the Concurrence of two-thirds of the Members present.
Judgment in Cases of Impeachment shall not extend further than to removal from Office, and disqualification to hold and enjoy any Office of honor, Trust or Profit under the United States; but the Party convicted shall nevertheless be liable and subject to Indictment, Trial, Judgment and Punishment, according to Law.
Article II, Section 2 provides:
[The President] … shall have power to grant reprieves and pardons for offenses against the United States, except in cases of impeachment.
Article II, Section 4 provides:
The President, Vice President and all civil Officers of the United States, shall be removed from Office on Impeachment for, and Conviction of, Treason, Bribery, or other high Crimes and Misdemeanors.

Leader McConnell has announced that the Senate will reconvene for the 116th Congress, 2nd Session, at 12:00 pm on Friday, January 3rd.

Please note, the first votes in the Senate are expected on Monday, January 6th.

So they are in recess??

I would think so.
Curious bit is House won’t return until Jan 7th, a Tuesday… which is the norm for the House, to travel on Monday and not start ’til Tuesday,( and leave on Thursday evening to return home).
(Nice work if ya can get it, right)
So, the Senate will be back at the helm Friday at Noon … Mjldr has something planned… but what?

This would be the first full recess of PDJT’ term….what appointments need to be made?

I think Mitch made most of them today!

I seem to recall something about the Senate taking some kind of action early in VSGPDJT term that prevents him from making recess appointments. Can’t research this now.

There is a silver lining in the Democrats illegitimate impeachment vote. For 3 years they have held a gun to the heads of 63 million voters for @realDonaldTrump with this threat.
They pulled the trigger. It misfired with no bullets left. We're STILL here. NOW IT'S OUR TURN. pic.twitter.com/PEZCpAViq1

Been out all day…anyone know what “surprise “ Kellyanne Conway was referring to for today?

Answers to your question seem to be really quiet . . . or maybe just extra short.

The only thing I can think of is Mark Meadows’ retirement from Congress to be some kind of aide to Pres. Trump. But I have no idea whether that’s it.

Very nice tour of this year’s decorations until the last snide comment – ‘Did the First Lady Melania Trump silence her critics here…’
So, no, thanks, I WON’T subscribe to the Daily Caller.

Ugh have they never heard that silence is golden.
Do we have better video of the decorations? Anyone know?

Here is the White House twitter thread about the decorations. There is also a White House Advent Calendar.

How many volunteers does it take to get the People's House ready for the Christmas season? Find out today on the White House Advent Calendar! 🎄 https://t.co/xRLUb0F7XH pic.twitter.com/H57lGdhDMk

The Daily Caller is not a Trump friendly outfit.

Didn’t they used to have benny? I usally never watch any of this stuff anyway.

Ahhh yes I forgot about that. So much to recall. LOL

IKR?
There’s so much to absorb from day to day.

I think the reporter was referring to the 2017 display which had the blood-red artificial holly display down a long corridor.
In any event, she said, ‘Let us know in the comments’, and everyone raved about how beautiful they were.
The video also featured the Marine band halfway through in relatively lengthy footage.

677
0
Would love your thoughts, please comment.x