Okay, so over the weekend, there was interest in finding a way to explain Que to the uninitiated. There were quite a number of suggested articles, videos, and other resources to get people started in understanding just what Que is and is not. (It’s not a theory, and as far as we know any conspiracy involved is perfectly legal.)

While the resources are good, and the dives are relatively deep, the information is not always distilled into an easily digestible format, or a simple explanation that is really what the general public needs as a counter to the mockingbird mainstream media hit job currently underway.

With that in mind, and…since this writer is a firm believer in making a point using the least number of syllables even if I don’t always practice that principle, I am going to suggest individuals develop an elevator pitch explaining Que in their own words.

Something like this, short and sweet with just enough detail to give the gist of the bigger picture:

Que is a small group of people believed to be military intelligence members posting messages on public chat boards. The messages include lists of questions designed to get the readers to research public information on a variety of topics related to how public officials have been selling out the United States for well over a hundred years, and how entertainment and the mainstream media is used by our enemies to influence public opinion and divide the American people.

Anything which is effective would be good.

Now, it’s your turn. Please, put your elevator pitch explaining Que in the comments, and please be charitable when critiquing the work of others. We’re all on the same team here.

HEH – just found this – and was coming to drop it off!
https://twitter.com/prayingmedic/status/1297578629476442112
This explanation is exactly WHY the MSM and leftists do not want Q to expose them and spoil their game!

My explanation/best guesses: Q is a ‘go around’ the media vehicle devised by the President and his trained intel people to combat the leftist propaganda narratives. Q is the disseminator of truth – an antidote to leftist disinformation – with Scavino being the ePublisher for the group of military and civilian intel people.

Here’s one – this is for people who are “too smart” for Q.
Q is an ingenious and very professional deniable psy-op – psychological operation – disguised as a LARP, meaning a “live-action role-player”, i.e., a pretender. Q counteracts, discredits, and bypasses the mass media, Silicon Valley, and opponents of Trump. It also serves as an educational and protective pied piper for a segment of Trump supporters who are vulnerable to disinformation, provocation, and psy-ops.

HAH, just watched the Swampkeeper himself, Chris Wallace, attack WH COS Meadows on Q. SOMEONE IS SCARED folks.
Wallace tried to go BEYOND labeling Q as conspiracy, NOW we are DANGEROUS folks….LMAO. Methinks Chris doth protest too much.
Scared Chris? YOU SHOULD BE, we, thanks to that “dangerous” Q, are ON to YOU and your ilk.
Q and we ARE “dangerous” but ONLY to YOU and your fellow LIARS and swamp denizens. Tic Tok, MF, Trump is winning in Nov and BIGGER, I suggest YOU take the night off, your TEARS and angry denials of that reality WILL be delicious. 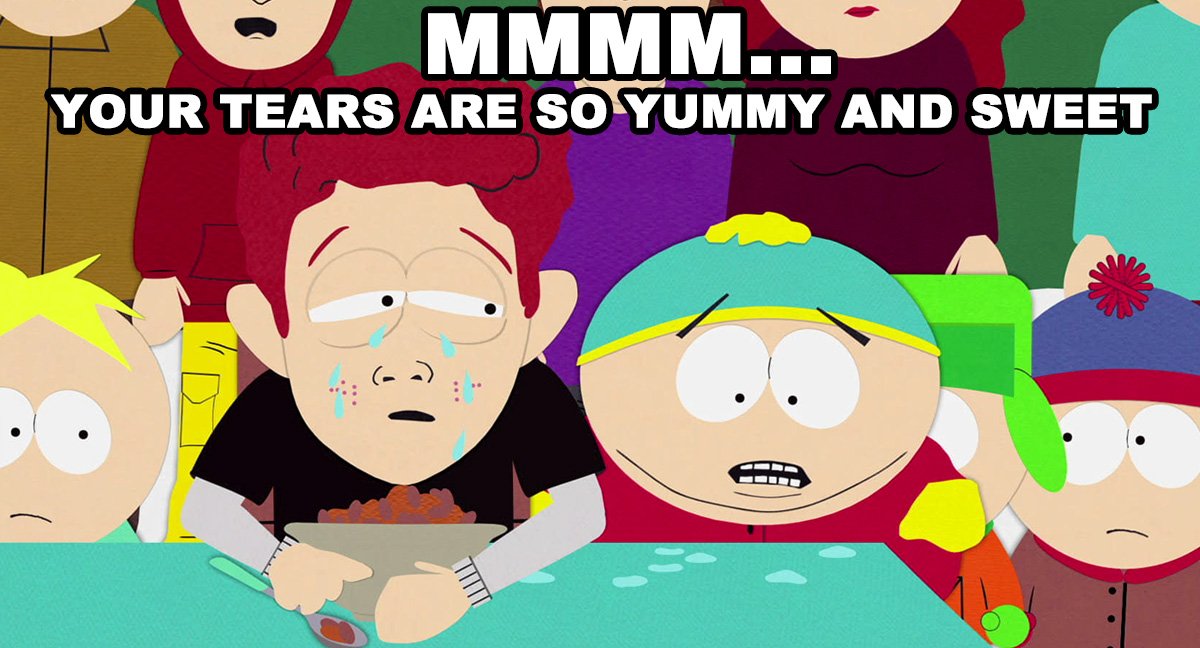 Which scares the peediddle out of the globalist left.

I don’t like that one very much.
Too much PC conformity, which is the opposite of what Anons are, and exactly what most of the world is.
I would change the first sentence (before the meme post) this way: “The Q movement is not a religious or cult movement, it is the opposite.”
Better yet, say what Q is, instead of what it isn’t.
Telling people you are not a religious or cult movement, without giving some indication of what you are, just leaves the impression that you are a religious or cult movement, because that’s what they heard, that’s what sticks in the mind. The word ‘not’ doesn’t stick, but ‘religious cult’ sure does.
As for the meme.
I’m not even sure it helps to be described as a ‘movement’. That’s a loaded word filled with vague connotations, and if any of them are good ones, they’re not occurring to me. Movements are for herds, herds are for sheep, and we’re not supposed to be sheep. That and ‘movements’ are easily associated with cults and religions, which the meme just disavowed, so it’s a conflicting message.
Q is not a PACIFIST movement group. We’re patriots. If someone attacks us, we’re going to defend ourselves as everyone has a right to do, so to say “The Qanon movement American patriots do not support, condone or tolerate violence of ANY kind” is disingenuous, and sounds like some kind of hippy beta-male cult, which is the exact opposite of Anons, who mercilessly mock beta males. It sounds like milquetoast for the masses, and I understand the idea is to appeal to the masses, but it’s not using truth to do so.
Which is like trying to lure people into church by promising them free coffee and donuts. That’s the wrong message, and if they’re coming for the coffee and donuts, they’re coming for the wrong reason.
Creating a better world is okay (probably go well with the old Coke commercial music, “I’d like to sing the world a song, in perfect harmony…), but “for every race, religion, gender and culture” is right back into the PC wasteland messaging.
If we’re trying to make the world better, that’s good enough. Listing all the individual divisive groups it’s going to be better for only falls into the trap of balkanizing everyone into little special interest groups. It’s identity politics, MSM-type messaging.
There are only two sexes, and each one has one gender. That’s reality. That’s truth. Some religions are bad, and not just the one everyone immediately thought of when I said that. We’re not trying to make the world a better place for Satanists, and Satanists happen to be part of what we’re opposing.
And their ‘culture’, which is objectively evil.
Much of this stuff is appealing to ‘identity’ messaging and not truth.
I realize the world is conditioned to expect ‘identity’ messaging, but I don’t think that’s going to appeal to anyone who is seeking truth.

And our memes and humour are fucking savage

For those who understand socialism and how to fight it:
Q is a Bezmenov-compliant counter-active-measure – a psychological operation – which is specifically designed to uproot and undo the psychological infiltration of the American mass media and national consciousness by all forms of socialism. The Q project remoralizes the demoralized masses, stabilizes socialist-generated instabilities, deflates and defuses psychological crises, and undoes socialist normalization, reverting society to pre-socialist normalities.

So, we need one of these for all contingencies?

There are nine letters in the alphabet after Q, waiting for use.
(For that matter, I don’t think they used the first sixteen letters on the way to Q, either.)

Q For Kids
Q is a secret team of people in the government who are helping President Trump catch all the criminals, spies and secret agents who tried to take over America. Those people stole trillions of dollars and killed millions of innocent people with wars, terrorism, and crime. Some of them are extremely evil, and do things so horrible we can’t even tell kids. But don’t worry, because the criminals cannot stop Q Team. Nothing can stop Q Team!

As I read some of the previous explanations, I kept thinking…too sophisticated. I’ve shared before that many, many years ago I was taught for the “masses” you need to think Readers Digest. Readers Digest was written for 6th grade level readers!! And, that was years ago! Since the dumbing down of students…it might be lower than that!
Honestly, I read Wolf’s “children’s’” version and that is pretty much how many of my non-political, non-educated family and a few friends would understand it. When I sit in a doctor office waiting room and look around….it’s a Readers Digest crowd for the most part.

I have to admit, that version for kids really appeals to the child in me!!!

Despite the topic being about Coronavirus Therapeutics, etc. – the press-titutes are sure to ask about Qanon.

WHOA – The President allowed 2-3 questions about the FDA Emergency Use Authorization (EUA) for convalescent plasma – then cut it off before they could ask any Qanon or political questions.
I’m disappointed that he DID NOT say anything about HCQ or Ivermectin or Pulmicort – as cheap and effective cures – which they most definitely are.
I’m angry as all get out about it, actually.

Me too. We need HCQ over the counter now. Then we can get this mess behind us.

I’m about over it. Dr. Harvey Risch is on with Levin tonight at 8. THERE will be some real info.

Just remember when the subject of Q is brought up. The right people are triggered.
WWG1WGA. Winning.

Q = Queens guy?
You know what they say about Queens guys – They like to mess wit’choo!

It’s interesting that they’re frightened of “Q” – all this nonsense about being a domestic terror group, and bad for the USA – when “Q” has done nothing, and isn’t anything more than what amounts to a think tank.
That’s it. Q is a Think Tank – it encourages people to research and think for themselves. Messages from or regarding Q are simply to stimulate further research and investigation.
Being fearful of something as innocuous as Q, while all around us are riots, and violence – that’s quite a stretch.
They’re going to try and make the Barr/Durham outcomes be conspiracy theories concocted by… Q! 🙂
This is their setting the narrative for what’s coming.

Agree, that makes stunts that demean Barr and Durham in context look WORSE.

Que is like the guy at a magic show who says, “ignore the wand — watch his LEFT hand.” People who hate and say it’s dangerous are generally trying to put on a magic show.

Major Patriot Retweeted
Praying Medic@prayingmedic
·
4h
Replying to @Jordan_Sather_
I contacted the Phoenix field office, the National Press Office & made a FOIA request. To date, there has been no confirmation that the bulletin is real.
I contacted the Yahoo News reporters who wrote the original story and asked them for corroborating evidence. Neither replied.
Major Patriot Retweeted
Jordan Sather@Jordan_Sather_
·
5h
So the fake news keeps saying the “FBI labeled QAnon a hate group”.
Let’s get this straight, a memo was written by a Special Agent at the FBI Phoenix office in May ’19, he was former CIA counterintel, it cited Snopes and Wikipedia, then Yahoo leaked it a month later.
Yeah okay.

Q is a group of people, probably Military Intelligence, that writes posts using the Socratic method to encourage people to research and dig deeply into world events, politics, and government affairs, to understand what is REALLY going on. Q rarely answers questions, more often posing them, sometimes in a complicated puzzle format to entice people into looking for the answers. It’s like a really complex game designed by the best military minds to inform the public of hidden truths.

36
0
Would love your thoughts, please comment.x