It’s quite clear to me now that the January Sixth Prisoners are being treated in a completely SOVIET way.

There is an easy answer.

Get some balls, people. NO Republican governor of any integrity should extradite prisoners to DC.

This is complete BS.

Not only is this treatment utterly unconstitutional – it’s disingenuous as hell.

None of these people are flight risks – unlike every left-wing domestic terrorist of the 1960s and 1970s, like Obama’s buddy, Bill Ayers.

There is NO REASON to hold them. NONE.

Meanwhile, violent ANTIFA felons who seriously injure police and innocent citizens are released on their own recognizance in communist blue states, but non-violent PROTESTERS in red states are being arrested by FBI teams with assault weapons and then transferred to a HELL-HOLE in Washington, where they are beaten by BLM racists and held indefinitely.

Make KAPO GARLAND prove that he’s actually being fair, because we all know he’s a dirty judge, and he’s NOT FAIR.

This was interview with Matt Braynard of the Amistad Project on Bannons War Room on Friday.
They are are organizing a protest march in DC on Sept 18 against the treatment of 6 Jan political prisoners:

OH WOW, this is a really great interview!

Great. Announce it nationally with enough lead time that the other side can get troublemakers in place.

Well by that time the whole political landscape could have changed.
Remember after Lindell’s Cyber Symposium, people need to start to organize direct action (something the left is always willing to do, but the right virtually never), since the Squatter in Chief will refuse to resign.

I agree. We have to recover PEACEFUL PROTEST.

Most important is not to get back under FAKES like Ali RINO Alexander. They always try to decapitate our movements.

Tell that to DeSantis…

I think we have an excellent argument that until, say, Florida officials and representatives have MET with their residents in DC-SHITMO, and are satisfied that their citizens are being treated decently, there will be NO MORE EXTRADITIONS.

And if they cannot meet their residents illegally held in DC? And if they aren’t satisfied that their citizens are being treated decently?

Send in the National Guard.

Notice how the communist PIECES OF SHIT intervene in OUR peaceful protests?

This is a huge problem that we have to face. We need TRAINED MUSCLE to keep these PIECES OF SHIT away from our protests.

I am afraid this is going to get much worse before it gets any better. Look for their SS Kapitol thugs (there not real police at this point) to start harassing more people. They’ll have immunity from any State authorities to carry out anything they want. In totally agreement with you Wolf, unless there’s push back by the State’s we’re all screwed.
History is repeating itself. Like someone else said here, I can now see how the Holocaust happened more clearly.

Time for a non-violent nationwide strike by conservatives – you know – the people who actually do the work and pay the taxes. Time to go on the offensive against the globalist POS’s. Patriot employers need to prepare in advance for an extended “vacation”. The governors and legislators in every state should have their hair on fire responding all of the calls, emails and protestors on their doorsteps. This is a republic. Follow the Constitution and laws that are lawful – not the illegal laws and illegal Feds.

This attorney says his client was arrested Jan 29 as a result of 6 Jan.
He was put in the ‘hole’ (solitary confinement) for 2 month and when he came back out and was back in his cell in the general prison section, he was attacked by one of the prison guards and was put back in the whole without any charge (after only 14 hours outside) and is in the ‘hole’ ever since.
He doesn’t have cloth on and that place is dark all the time

Here is the video!!!

I nominate Kathryn Fifield for death penalty eligible prosecution for violation of every code of ethics and law and Constitution.

What they are doing is a war crime and a violation of human rights.

It’s VERY instructive to compare with Nuremberg and the Holocaust. If I am correct about the vaccine, and it is part of a plot to enslave the people of the world medically into socialism, then the people behind the plot could indeed hang if they don’t “win the war”. But if they win, people like us will surely die in camps.

Many of the people will just say “I didn’t know – I wasn’t part of it.” It will be a lot like de-Nazification.

Right now, people like Fifield are only provably as bad a “Boss Hogg” sheriffs of the old South, who abused their positions to imprison falsely, trump up charges, beat prisoners, etc. If some of the prisoners die, it get worse. Even the hoaxes by Wray are just legally allowed propaganda bullshit, where fake crimes are created or instigated for control. It’s a scandal, but none of what they have provably done YET rises to Nuremberg levels.

We are at the stage of Hitler beating up and imprisoning Jews, with moves having been made toward their “final solution”, but they have not actually “run the gas chambers”. I believe the THIRD DOSE is basically where people start dying after that, if they don’t get the FOURTH DOSE.

The THIRD DOSE is Zyklon B.

From Wikipedia, the free encyclopedia
Jump to navigation 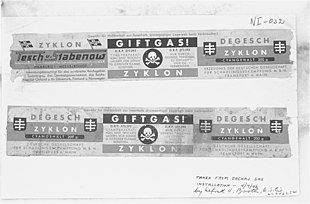 Zyklon labels from Dachau concentration camp used as evidence at the Nuremberg trials; the first and third panels contain manufacturer information and the brand name, the center panel reads “Poison Gas! Cyanide preparation to be opened and used only by trained personnel”

listen); translated Cyclone B) was the trade name of a cyanide-based pesticide invented in Germany in the early 1920s. It consisted of hydrogen cyanide (prussic acid), as well as a cautionary eye irritant and one of several adsorbents such as diatomaceous earth. The product is notorious for its use by Nazi Germany during the Holocaust to murder approximately 1.1 million people in gas chambers installed at Auschwitz-Birkenau, Majdanek, and other extermination camps. A total of around 6 million Jews were murdered during the Holocaust.
Hydrogen cyanide, a poisonous gas that interferes with cellular respiration, was first used as a pesticide in California in the 1880s. Research at Degesch of Germany led to the development of Zyklon (later known as Zyklon A), a pesticide that released hydrogen cyanide upon exposure to water and heat. It was banned after World War I, when Germany used a similar product as a chemical weapon. Degussa purchased Degesch in 1922. Their team of chemists, which included Walter Heerdt [de] and Bruno Tesch, devised a method of packaging hydrogen cyanide in sealed canisters along with a cautionary eye irritant and one of several adsorbents such as diatomaceous earth. The new product was also named Zyklon, but it became known as Zyklon B to distinguish it from the earlier version. Uses included delousing clothing and fumigating ships, warehouses, and trains.
The Nazis began using Zyklon B in extermination camps in early 1942 to murder prisoners during the Holocaust. Tesch was executed in 1946 for knowingly selling the product to the SS for use on humans. Hydrogen cyanide is now rarely used as a pesticide but still has industrial applications. Firms in several countries continue to produce Zyklon B under alternative brand names, including Detia-Degesch, the successor to Degesch, who renamed the product Cyanosil in 1974.

Law abiding Citizens of UNITED States of America will hold the line.

The enemies of the United States, foreign and domestic are criminals ..

Seriously this a place where Abbott can step up by locking up those renegade state reps and keep them from getting out of jail. Two of them are back and should be in jail not at home.

19
0
Would love your thoughts, please comment.x