This QTH OF JULY open thread is VERY OPEN – a place for everybody to post whatever they feel they would like to tell the White Hats, and the rest of the MAGA KAG! KMAG world (KMAG being a bit of both).

REMEMBER: This is our SECRET WEAPON OUT IN THE OPEN!

AND PRAY FOR AMERICA TOO!

Q posted today – in preparation for the Qth of July – and I thought it was worth covering, because a great thought really struck me from these posts.

A New False Narrative, Part of the Disinformation Campaign

What happens when the ‘controlled’ are told to create a new false ‘racist’ narrative [disinformation campaign]?

This president would love nothing more than to divide our country based on race, religion, gender, orientation, ability, or immigration status. This is the only way he thinks he can prevent the solidarity of working people.

We’re not falling for it.

What I find remarkable here is that these two women standing here, in the video in this tweet by Ilhan Omar – namely Ilhan Omar and Ayanna Pressley – minus their comrades, Rashida Tlaib and Alexandria Ocacio-Cortez – represent two things which both want WITH INCREDIBLE FEROCITY to take away MY rights and MY freedoms.

In fact, they want to take away EVERYBODY’S rights – all in the name of “equality”.

In doing so, those two things – communism and Islamism – have LITERALLY gerrymandered REALITY ITSELF in every possible IMAGINARY way except the ways that matter.

But what I find MOST ODD is the following.

THEY ARE THE ONES WHO CREATE THESE DIVISIONS.

They FEED on these divisions.

They NEED these divisions.

They STOKE these divisions.

They START these divisions.

They SPARK these divisions.

They CREATE these divisions.

They EXPAND these divisions.

They MAKE TOXIC these divisions.

And now – at long last – they actually have the GALL and the HELL-DESERVING CHUTZPAH to BLAME these divisions on somebody else.

I can in no way say this more strongly.

If you hate this country, which you do, please leave and go to CHINA.

IF you EVER come back, you may think differently about America. But I will tell you ladies this. We will NEVER let you turn this place into another China, where they have REAL socialism, and REAL concentration camps for Muslims, and REAL SLAVERY for PEOPLE LIKE ME.

SO GO TO HELL, SOCIALISTS.

We will NEVER let you bring socialist concentration camps here.

Oh, and by the way, I posted about that earlier. Have a look.

Speaking of CHINA and the FOUR HATEWOMEN, I posted this on Gab, about “GO BACK”….

Why should the Four Horseladies go back? Enlightened SOCIALISM and KINDA SORTA EX-SOCIALISM IN China and Russia await their new citizens!

“Comrades Ocacio-Cortez, Omar, Tlaib and Pressley! Welcome to your new home in CHINA!”

SOCIALISM! IT’S AWESOME – FOR THOSE IN CHARGE – FOR A WHILE!

POTUS rally, GREENVILLE, NC, 7PM Eastern. VP Pence to be there too. 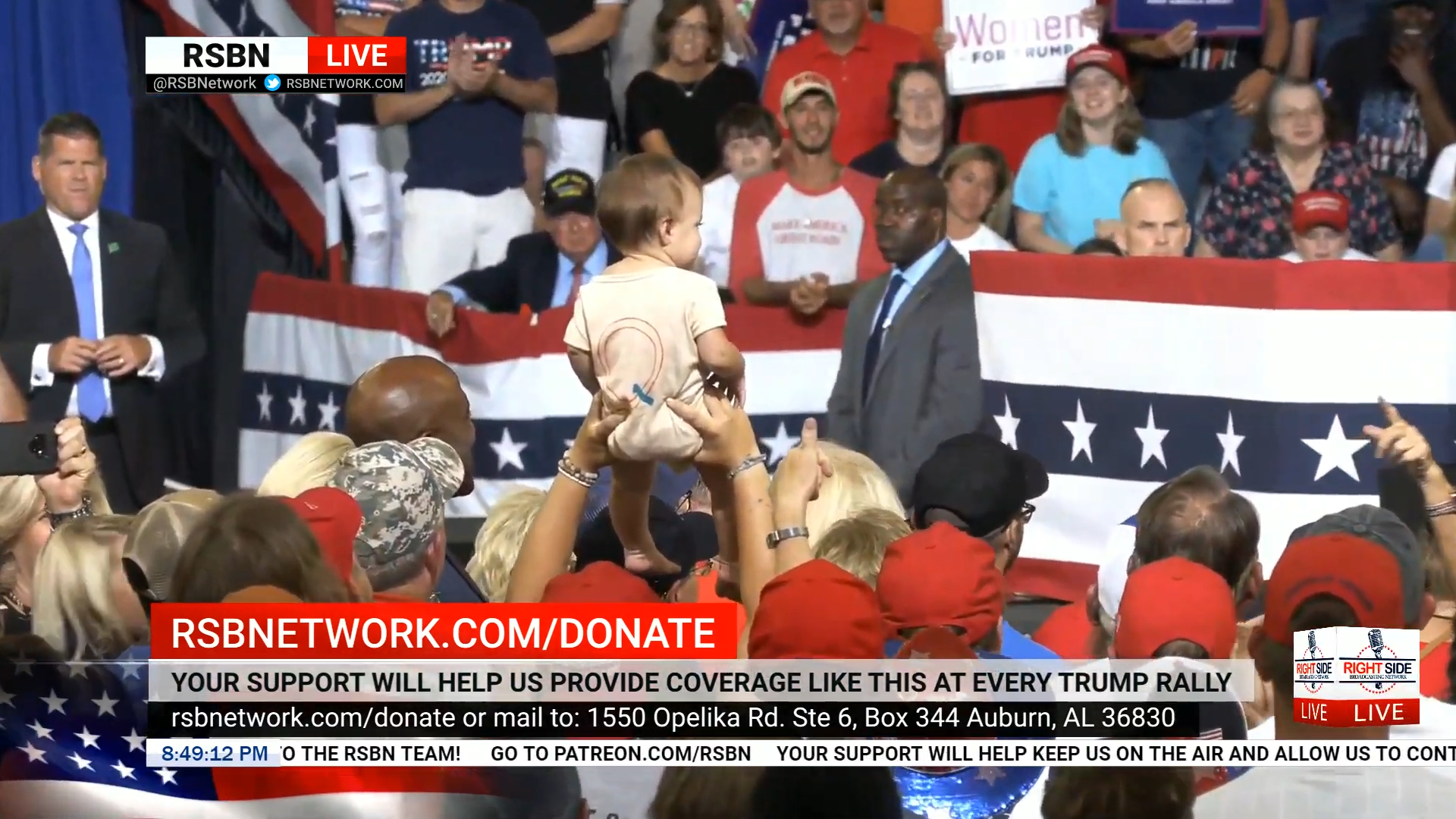 Qanon July 17 2019 – Think For Yourself
https://www.youtube.com/watch?v=dZj6ZuCAsvw&feature=em-uploademail

Hahahaha!!!!!
“Officials in West Palm Beach are hoping a continuous loop of children’s songs played throughout the night will keep homeless people from sleeping on the patio of a city-owned rental banquet facility.
West Palm Beach parks and recreation director Leah Rockwell tells the Palm Beach Post they’re trying to discourage people from sleeping outside the glass-walled Waterfront Lake Pavilion, which she says rakes in some $240,000 annually from events.
The loop of “Baby Shark” and “Raining Tacos” is a temporary fix to keep homeless people off the patio. Rockwell says the city wants to formalize hours for the facility, which should make trespassing laws easier to enforce.
Illaya Champion tells the Post “it’s wrong” to chase people away with music. He says he’ll still sleep there, but “it’s on and on, the same songs.”
https://ktla.com/2019/07/17/florida-city-hopes-baby-shark-song-will-drive-homeless-away/
For your listening pleasure…

I about DIED when I read this. One of my nephews was really into this.

We still love baby shark. Never heard the taco one but mr gil is going to annoy guys at workbwith it. 😁

Does anyone know where we can see who in the House voted for impeachment? I want to see how my Representative voted, but I can’t easily find it.

For people who have browser issues:
The DEMS:
https://thehill.com/homenews/house/444874-whip-list-dems-who-support-an-impeachment-inquiry-against-president-trump

That could well be the best one I’ve seen yet.

The Beast? It’s been around a while. My brother used to rave about it.

No more if those for me. Thats as closecas I’ll get ti it. Woo!

I haven’t ridden in a while. But, the POV videos do the trick for me. 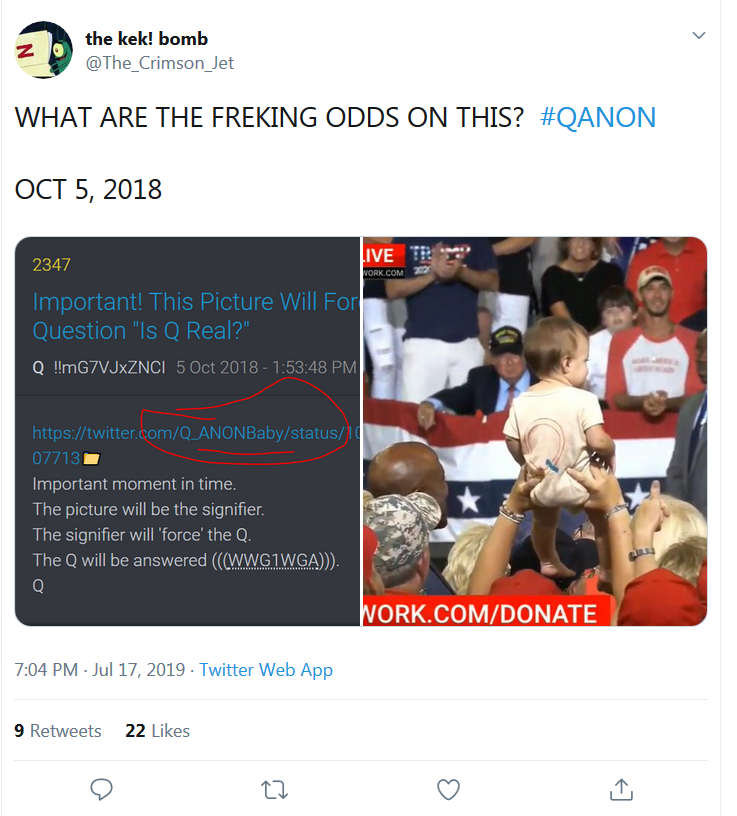 COOOOOOLLLLLLLLLLLL! Then POTUS’s comment about I don’t know those people, I did not set this up! LOL

I have never seen that guy in my life, I missed the translation the first time through.

Very cool. They’re TOYING with the FAKE NEWS now.
Oh, I get this strategy out the wazoo.

I have a probably ignorant question. The two watch pictures, one from march and one from now, the two little dials are both the pointing exactly the same. What do those 2 little dials stand for or measure? I
s it unusual that whatever they measure would be the Exact same both times and in months so separated?
Was it the reflections at which we are supposed to look closely or those dials being the same at whatever they are measuring despite being at different times months apart?
Or were the pictures taken at the same time/same day, pictures saved to then be used as needed or when appropriate for their message?
Might not be anything but I really don’t know. Depend on brains greater than mine! ha
I like that the second hand is always straight up – taking the picture on the Exact time. Precision. I like that.

What type of watch does POTUS usually wear? Other key players/admin staff? Anyone seen wearing this watch? What happened at the times on the watch on those days? Just thinking…

https://twitter.com/The_Crimson_Jet
thought this would interest everyone

i meant just to put this image but thread is interesting

Send her ass back too.

Think it would be great to use in a campaign commercial for candidate opposing her….or even in the general to show the face of the Dem Party

Nice! LET THE RECORD SPEAK FOR ITSELF.

Who are “my people”? Citizens of another country? People who are not American?

Pretty much my question. I can’t imagine your speculation is wrong.

From the looks of things the Squadies are inspiring their junkyard dog followers to hate not only the US flag but the State’s too. No borders anywhere?

Here a protestors rides on the back of a disabled persons wheelchair doing donuts over the Colorado State flag and the crowd goes wild. @AuroraPD has officially stated they chose not to interfere with crowd because it was filled with children and disabled, which is true. pic.twitter.com/PqbvWfVApx

WOW, truthful testimony in the US Senate, that RARELY happens anymore, everyone is too busy “shaping”, or should I say “spinning the narrative

473
0
Would love your thoughts, please comment.x