I am writing this Wednesday night. The DC Appeals Court has ordered Sullivan to dismiss the case.

I’ll be honest, I doubt he’ll do this. If having the government move to dismiss the charges didn’t do it, why should this?

When the government first moved to dismiss, everyone here was celebrating and I was, frankly, shat on by some for trying to point out that the judge actually had to grant the motion and dismiss the case. It was a done deal, as far as everyone (but me) was concerned.

Until Sullivan actually does this (or someone finally does it for him), Flynn’s legal status is that of a convicted felon awaiting sentencing, because to the best of my knowledge the trial phase ended with his guilty plea, which has never been vacated.

I said his legal status, not his actual character.

Well, hopefully Sullivan finally folds. But I wouldn’t be surprised if he tries another delaying tactic.

If nothing else the absurd lengths to which that sack of bearded dragon poop will go to avoid ending the trial of General Flynn tells us that it’s very important to someone that this trial never end. The judge dragged out sentencing (one way to end the trial), now he’s dragging out dismissal.

Reminder of the Most Important Thing about the MAGA Movement

Yes, I am going to harp on this, because it is the most important thing President Donald J. Trump has to do, and he hasn’t really gotten started on it yet.

Our movement is about replacing a failed and corrupt political establishment with a new government controlled by you, the American People...Our campaign represents a true existential threat, like they’ve never seen before.

1. No food fights
2. No running with scissors.
3. If you bring snacks, bring enough for everyone.
4. The gun is always loaded.
4a. If you actually want the gun to be loaded, like because you’re checking out a bump in the night, then it’s empty.
5. Never point the gun at anything you’re not willing to destroy.
6. Keep your finger off the trigger until ready to fire.
7. Be sure of your target and what is behind it.

Now it wouldn’t be one of my posts without a coin, would it?

The California Gold Rush brought massive amounts of gold into the streams of commerce, so much so that its value relative to silver dropped greatly (hence leading to the silver coinage weight reduction of 1853). There was so much gold that the US decided to start issuing $20 gold pieces. One was made in 1849 as a pattern piece, and it belongs to the Smithsonian. But in 1850 production began in earnest in Philadelphia and New Orleans, using gold from California (the San Francisco mint was four years in the future). At the time we had two other mints, in Charlotte, NC and Dahlonega, GA, both started in response to gold strikes, but those mints did not produce any double eagles.

A word about that name, “double eagle:” Our original monetary system was set up as follows: 10 mills equals one cent. 10 cents equals one disme, 10 dismes equals one dollar, ten dollars equals one eagle. The only thing not “new” to the world here was the dollar; it was essentially equivalent to a Spanish Piece of Eight, known as a “Pillar Dollar” for reasons that may become apparent if I ever decide to highlight the coin. And the word “dollar” is a direct descendant of “Thaler,” which is short for “Joachimsthaler” or “from Joachimsthal”, a very rich silver mining strike in what is now the Czech republic, where big silver-dollar sized coins were first made.

We never made mills, but we did make cents, dismes, dollars and eagles, quickly dropping the s in “disme.” Indeed that’s the legal name of the ten cent denomination…the coin we use today actually has the word “dime” on it, it’s not a nickname, like “nickel” is.

Only after the California gold rush brought a veritable gusher of gold into human hands, did we decide to come up with a double eagle (and a gold dollar coin, very tiny thing), and the coin is, physically, a bit smaller than a silver dollar. However, because of the great density of gold, it’s noticeably heavier than a silver dollar–it may well have been the heaviest gold coin ever made as of that time. In fact it weighs over a troy ounce. However, since ten percent of it is copper and silver alloy, there is a bit less than a troy ounce of gold in a double eagle. That amount stayed constant through the end of US gold coinage in 1933. It’s possible to obtain a much more recent gold double eagle, in perhaps not as nice condition, for not much more than the spot price of an ounce of gold–which almost breached $1800 on Wednesday (and maybe will have done so by the time you read this).

In 1866 the motto “In God We Trust” was added to the reverse, and the shield was redesigned. In 1907, this type ended, and was replaced with what collectors call the St. Gaudens (renowned sculptor Augustus St. Gaudens created the design), in an ultra high relief (rare), a high relief (readily available but in high demand, so still pricey), then finally the regular relief you’ve probably seen (those can be inexpensive depending on date). The coin originally did not contain the motto “In God We Trust” on it, because President Theodore Roosevelt considered it sacrilegeous to put God’s name on mere money. Congress made him add it back on.

The No Motto coins of 1850-1865 tend to be very rare today in uncirculated condition, and the most common date is 1857-S. That’s because a shipload of them sank in deep water aboard the SS Republic that year, causing an economic panic, but allowing us to recover them with robots today.

Did the US ever try for something even bigger? There was talk of a $50 gold piece…imagine, almost two and a half troy ounces in ONE coin. In fact, some private mints (which were legal then, barely) did indeed make such “slugs,” usually octagonal in shape. And in the 1870s some patterns were struck, not in gold but in copper, the right size, but not actually containing any gold. The design was essentially an enlargement of the double eagle design. There was talk of defining a “union” equal to ten eagles, so this coin would have been the “half union.”

But only in 1915 did the mint do anything official; in order to commemorate the Panama/Pacific exposition, both a round and an octagonal $50 gold piece were made, and those will set you back over fifty thousand dollars, each, today.

Reminder Of One Basic Fact

Just one more thing, my standard Public Service Announcement. We don’t want to forget this!!!

Aha! Question is whose drone?

And a drone in the middle pic.twitter.com/RnZalSI6j0

I don’t think I’d be sleeping very well if the POTUS was tweeting out my pic on a wanted poster. 😅

I gotta tell you, I love your President more and more every day.Imagine! Tweeting out a wanted poster…

Mauritania is totally marxist, which accounts for their forced labor slavery practices.

I bet they didn’t expect to be captured on camera. This sends a great message to others too.

They are so SCREWED!
Defacing a National Monument is a Felony with a minimum 10 years in Federal Prison.

I all of the sudden love tattoos! 😜

https://twitter.com/TheCollectiveQ/status/1276729925026959366?s=20
GEORGE Flag of United States@TheCollectiveQ
·
18h 
Office of the Press Secretary
FOR IMMEDIATE RELEASE
June 26, 2020
President Donald J. Trump’s Letter to the Governor of Illinois and Mayor of Chicago

Reply:
Alyssa@AlyssaMrsaven05
·Now he should send that to NY Gov and Mayor of NYC.. disgusting “leadership”

I bet President Trump spends a lot of time hitting balls on the new golf simulator he paid for in the basement of the White House. Bet he uses a big heavy driver and hits the heck out of those balls….pretending they are Democrat and Media heads. 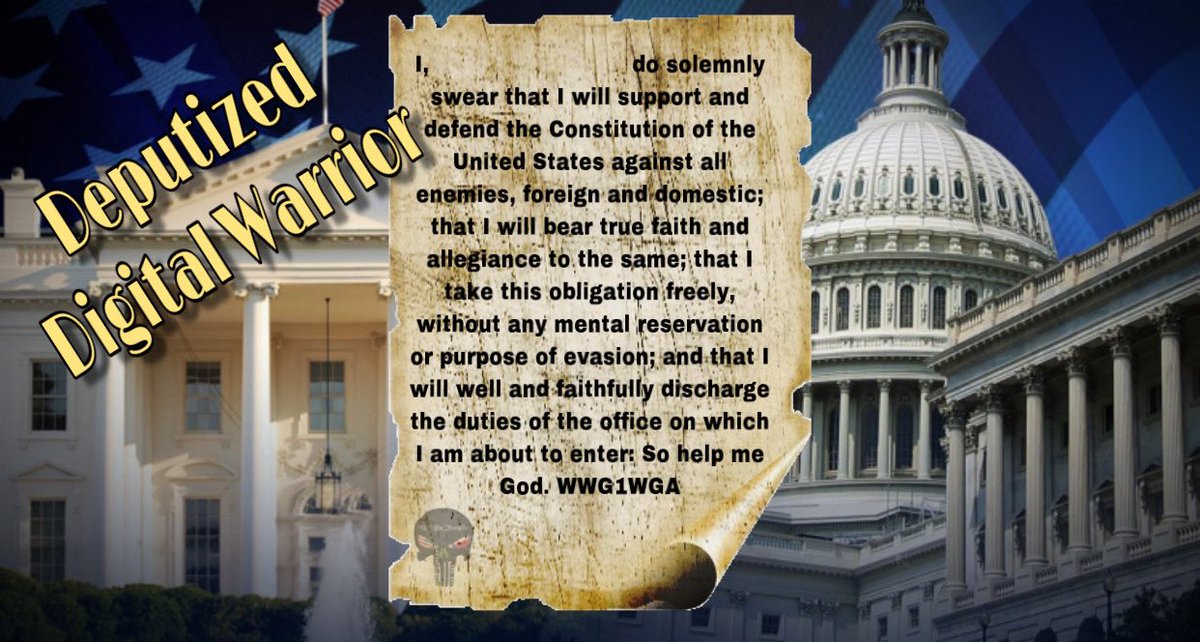 And then we have THE GREATEST GENERATION https://t.co/VKQmT17ybZ

The left eating their own
https://www.kmov.com/news/lyda-krewson-reads-names-addresses-of-demonstrators-calling-for-police-reform-during-facebook-live/article_9452a884-b81f-11ea-b03b-bf8949a0ebeb.html

TikTok is BAD NEWS
Guy Who Reverse-Engineered TikTok Reveals The Scary Things He Learned, Advises People To Stay Away From It
https://www.boredpanda.com/tik-tok-reverse-engineered-data-information-collecting/

Now where have we heard that before ?
https://youtu.be/HeGTPxNg4Tg

Absolutely as chilling today as it was when I first heard it. I knew we were in for big trouble; and Biden, Hillary, Pelosi, and the rest want to take up right where O left off.

I wanted to drop this here as the there are loads of links to so many things I bookmarked the page to have handy.As a Christian this article makes the case for me about the world being run by satanists.i think zero needs more in depth digging.
https://cathyfox.wordpress.com/2020/06/04/obama-now-running-the-satanic-council/

Øbozo is a few levels from the top.
He was groomed for the position(s) he took. The real power remains unseen, and unknown. We must pray that GOD shines HIS Light upon it, and reveals the evil ones behind these events.
Also well worth noting is the fact that both Hill-the-BEAST and BeezleBubba are Satanic Black Magick Illuminised Witches. Magick, not Magic. There IS a HUGE difference. A SATANIC difference. And one of the oddest things of all is that Hillary outranks Bill… Hence “Billary” and Hill-the-BEAST having her own office in the Klintoon White House, and the Goreacle being, as it were, left out in the cold…….

HEAR, HEAR! Except he didn’t sign them, that process is legislative, and at least one wasn’t ratified.

Since Princeton University is removing Woodrow Wilson's name from its buildings due to his racist thinking and policies, I think we should also repeal the Federal Income Tax and The Federal Reserve, as both acts were signed into law by Wilson. Letting either law stand is racist.

Since the Demoncrat Mob wants to tear down Lincoln’s statue…
Does that mean they want to repeal the Emancipation Proclamation?
🤔

Now they are going after John Wayne
https://www.thegatewaypundit.com/2020/06/orange-county-california-democrats-vote-rename-john-wayne-airport/

What’s next? …Ban all his movies?
I’ll bet the commies would love to do that too.
John Wayne was unapologetically Pro-USA — so of course they would like to erase all traces of him.
😠🤬

More suspicious booms in my neighborhood tonight. They sound exactly like last night’s booms. Local media claims they’re “fireworks.” They don’t sound like any firework I’ve heard in my life!

This is the video from the lady who was with him. The white people never even talked to them, just distanced themselves and walked away. She says that if black lives mattered so much to them, the least they could have done was say hello:

SMH, church – from what I have seen – most of them have no idea what they are doing – just motivated to scream and shout platitudes that have no meaning – nothing better to do?

Virtue signalling makes them feel better.
Many of these protesters are probably dysfunctional people with troubled lives.
But the hypocrisy of them seeing two black onlookers and not even speaking to them really struck me. Terrible.

True, Church – Dysfunctional for sure! Lost!!!

Unfortunately, I wish it were not true.

482
0
Would love your thoughts, please comment.x